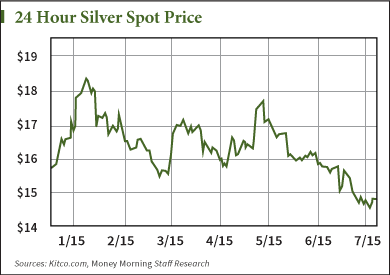 There seems to be a prevailing narrative that investing in silver is only attractive at a time when global central bankers are pursuing easy money policies like low interest rates and quantitative easing.

So with the U.S. Federal Reserve looking to raise rates some time before the end of the year, investing in silver right now doesn't look like the best idea.

So, why would anybody be investing in silver right now?

The obvious answer is that silver investments aren't supposed to be played for explosive gains. They go hand-in-hand with precious metal investments like gold as a way to diversify and provide an asset uncorrelated to the broader market movements.

Silver, like gold, can be looked on as insurance.

But that still falls short of quelling some investor concerns such as, "Why are silver prices falling?"

Especially when for the better part of the last decade, global central bankers haven't shied away from easy money. The conventional wisdom is that with such an "inflationary" bias in central banking, gold should be getting a boost as more money is printed.

The answer to that is a little more complicated.

How an End to Easy Money Makes Investing in Silver Attractive

Just wondering , If we have some kind of disaster how can we spend silver or gold? If we needed grocery's for example and tried paid with Precious metal, who and how would we determine what its worth?I tried to buy a new car with gold and the dealership wouldn't accept it! "ARE WE LIVING IN A DISASTER"