The People’s Bank of China uses its massive reserves to buy or sell the yuan to maintain a desired exchange rate. It’s been pegged to the U.S. dollar in some way for decades.

So, a strong dollar has often meant a strong yuan.

That hurts Chinese exports, and it’s been a sticking point in China’s ongoing negotiations to secure the yuan’s “reserve currency status” at the International Monetary Fund (IMF).

I wasn’t shocked, though. It was a logical move after all, and its implications open a nice profit opportunity for us...

The Markets Are Asking the Wrong Question 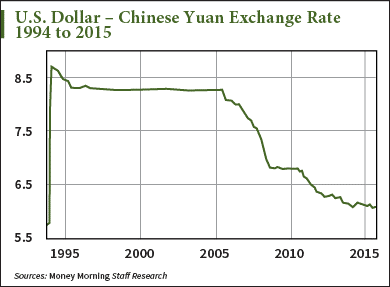 As dramatic as China’s move was, and for all the chaos it unleashed on the global markets, you can see the episode barely registers as a blip on this chart.

The question the pundits were asking, or perhaps begging, was, “What was the impetus?”

On the surface, that question is easy enough to answer…

Chinese exports have been slowing, with the July reading down 8.3%.

China’s economy counts on exports for a third of its gross domestic product (GDP). So a move like this was meant to act like a defibrillator, aiming to shock exports back to life.

Another reason is the Chinese stock market. The Shanghai Stock Exchange Composite Index has crashed, now down 42% since mid-June, recording multiple days of 7% or higher losses.

But a cheaper currency and lower interest rates are not the same as structural reforms.

The markets just didn’t get China’s “long game” or the lofty goals China is still working toward.

Boasting the world’s No. 2 economy, China wants to join the “good ol’ boys’ club” of truly global currencies. And that means achieving “reserve status” for the yuan with the IMF.

Now, one of the main criticisms of China’s management of the yuan has been its lack of “free market” pricing.

The IMF’s original deadline to decide on including the yuan in its Special Drawing Rights (SDR) currency basket was this fall.

That’s now been officially been delayed by a full year until September 2016, conveniently giving the Chinese yuan time to devalue well before a decision needs to be announced.

Rather than call the Chinese “currency manipulators,” a charge we’ve heard many times from many quarters (especially the United States), the IMF welcomed the move, saying it helped make the yuan more reactive to market drivers.

Effectively, they said Beijing should target a freely floating exchange rate in the next two to three years.

But as always happens with such high-handed interventions, there are going to be some unpleasant unintended consequences.