Global stock markets declined Friday ahead of the U.S. jobs report and jitters over next week's resumption of trading in China. 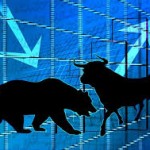 Even dovish comments Thursday from European Central Bank (ECB) President Mario Draghi failed to spur a rally in the Eurozone region. Draghi said the ECB is prepared to give the Eurozone more stimulus if inflation across the 19-country bloc doesn't pick up.

In addition to keeping interest rates low, the ECB is pumping 60 billion euros (roughly $66.7 billion) a month into the region's economy via government and corporate bond purchases. The program will run through at least September 2016.

Equity markets in the world's second-largest economy remained closed for the second consecutive day Friday as the Asian nation marks the 70th anniversary of Japan's defeat in World War II.

Following a three-month stretch of stomach-churning stock market gyrations, and a surprising yuan devaluation, some investors may be taking advantage of the Chinese holiday to trim their stock exposure, uncertain how Chinese stocks will perform when they resume trading Monday.

Some investors stateside, not wanting start the long weekend with sizable positions and unable to trade Monday in reaction to China's reopen, also likely lightened up on equity holdings. Others sold in reaction to the release of the August jobs report.

The U.S. Bureau of Labor Statistics reported Friday that employers added a modest 173,000 jobs last month. That was shy of consensus estimates for 220,000. But August typically misses expectations on the first print by some 60,000. It also has the most upward revisions, according to Deutsche Bank.

U.S. central bank policy makers will consider that nearly full employment read, as well as August's usual upward job revisions, in its decision to raise interest rates. A hike could come as soon as this month at the Fed's Sept. 16-17 meeting.