Like much of his campaign, Jeb Bush's tax reform plan is "weak tea."

Bush proposes to reduce tax rates, which is a good thing. But he just doesn't go far enough.

Rather than a bold program to radically reshape the unproductive U.S. tax code, Bush does not go far enough to rewrite the DNA of the U.S. economy.

And make no mistake about it – the tax code is the DNA of the U.S. economy. It creates the incentives that drive businesses and individuals to make certain types of economic decisions that dictate how fast the economy grows.

Now, here's what we need to be doing instead…

An Alternative to Jeb Bush's "Buffet" of Tax Brackets 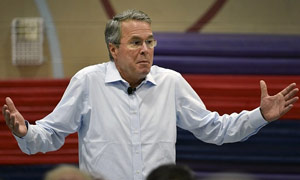 Bush offers three tax rates – 28%, 25%, and 10% – that are still too high. He also wants to cap deductions for wealthy taxpayers, but he isn't specific about how to do this.

Instead, the right numbers are…

And we should be eliminating all deductions – except charitable deductions, which should be capped at 20% of taxable income per year.

Bush's plan for only modestly lower rates and the retention of deductions with caps would leave us with a complicated tax code. We would be much better off with a simpler code with lower rates and fewer deductions.

Such a code would likely yield higher revenue and eliminate the distortions introduced into the economy by special-interest tax deductions.

Bush only partially addresses the biggest distortion introduced into the economy by the tax code – the unduly favorable treatment of debt.

Every time someone borrows money, the American taxpayer becomes a kind of silent partner in that transaction by participating in the tax subsidy that the tax code provides.

By eliminating the deductibility of debt – including the deduction for interest on home mortgages – we can begin to recapitalize our economy with equity.

Income Is Income, So Tax It That Way

Not all loan interest is deductible. The only common interest deduction is from home loans, but you failed to be more specific. If your plan was put in place, home values would plummet because of the lost incentive to buy, but you failed to mention that. A more complete plan would allow home loan interest deductions with a cap of $60 k a year and a cost of living adjustment. Too often Tax laws are put in place without COL adjusted caps. This only makes the law useless over time.

You are absolutely right about the tax code, it is the DNA of the U.S. economy and it favors debt and punishes production (income, savings and investment). It is production that creates wealth, improves the standard of living and builds a stronger tax base. Production works best when people and markets have freedom and the natural laws of economics are not disrupted by government and political actions. Free markets do result in lower prices and higher quality. Taxing production and favoring debt leads to economic suicide. The tax reform solution is to move the tax base from production to consumption.… Read more »

The govt. cannot afford to lower taxes. It's not possible with the current and increasing mountain of debt it possess. If you think your tax burden is going anywhere but up you're delirious. Add in the under funded liabilities of the federal and state govts. and you begin to see why this is the case. By eliminating the tax deductability of Business debt how do you propose new companies can survive. And taking away the Mortgage interest deduction from homeowners would be political suicide. You do still have to get elected before you can make these fantastical changes. By the… Read more »

Actually, Trump has said he wants to put H&R Block out of business so I am assuming he would implement some sort of flat tax or at least a very simplified tax code.

There should be dozens of posts here letting you have it for your big government tax pig nonsense. I've already paid tax on my income via the income tax … a tax the founders expressly forbid in the Constitution by the way. And now that I've run that part of the tax skimming gauntlet, you want to tax whatever capital gains I manage to make on what's left at regular income tax rates! That you want to tax it AT ALL is appalling. Do you, a financial guy, actually WANT to discourage productive investment? Do you really want to punish… Read more »

Ending mortgage interest deductions would cut across all forms of real estate. It is a business expense that does not contribute to equity. If, however, the tax rate on income was 17.5% there would be some offset to the higher reportable income resulting from the loss of the deduction. Perhaps all. Homeowners could experience the same thing. Those making under $100,000 would be taxed at 10%. Their current average rate is likely higher. Their taxable income would rise by the amount of interest they currently pay, but their tax rate on their total income would be less. It could well… Read more »

IMHO you, and every politician I know seem to be missing the point entirely; you're just not getting it. I don't know if this is intentional or you really don't see it. The root problem to taxation, and quite frankly to most of the problems we face with an ever increasing corrupt government, is found in the 16th amendment. The language simply gives Congress too much power without true accountability. It is a Trojan horse, a virus that has penetrated our "three branches of government" firewall designed by our forefathers to protect the people from corrupt government. You see the… Read more »

The fallacy of the proposal it that it proposes to use tax simplification to reduce taxes, but makes no effort to reduce spending. The result will be, as reported elsewhere, to add approximately $300 billion/year to the existing deficit. The theory is then trotted out that this $300 billion will be sufficient to grow the economy and at some point in the future that growth will offset this $300 billion. Of course, while this transpires, the deficit will rise to $800 billion or so. After all, if the proposal were revenue neutral, as in generating the same tax revenues after,… Read more »

I am a firm believer id doing away with the IRS and the current suffocating tax code with all of it's goodies in it for those that make a large income. One of the problems is that eliminating the IRS would place some 50 odd thousand people out of work from the IRS alone let alone all of the tax attorneys, tax accountants, CPA's and the myriads of privately employed people who work on taxes for corporate America. Now please don't get me wrong, I am totally in favor of getting rid of the IRS and all the people in… Read more »

CATHOLIC CHURCH 500 YEARS OF EXPERIENCE WITH TITHES Why reinvent the wheel so often? Politicans sound good, or do they really. The Catholic Church has plenty of experience with collection of tithes from its members. Such experience teaches church leaders that there are limits ( to honesty or taxes ). 500 years ago church tithes equaled taxes. The Catholic Church found out that tithes up to 10% of income were honestly accounted for. However, tithe "contributions" in excess of 10% of individual income resulted in increased cheating on the part of members. If this happened in the Catholic Church in… Read more »

I love the idea of raising corporate tax rates, which would be the effect of eliminating thousands of deductions. 60% of all corporations pay no income tax and of those Public companies tracked by Morningstar, the effective tax rate is less than 17.5%. Since the Supreme Court thinks corporations are people, is there really any justification for two different rates anyway?

Who do you think actually pays the taxes corporations are on the hook for? Where do think corporations get the money? The money fairy? It comes directly out of the pockets of their customers and/or shareholders. Raise corporate taxes and one of two things happens … or a combination of both. Either they raise prices to pass along the costs to the consumer or they eat the cost and the enterprise becomes less profitable. There's really no such thing as a corporate tax. It's simply an indirect tax on consumers … you and me … and shareholders … you and… Read more »

there are few things more immoral than taxing someone for work or taking a risk with their money to make more.