Lockheed Martin stock is down 0.9% today (Wednesday) at $201.71 as the global aerospace titan rolled out its first highly anticipated F-35A Lightning II for the Norwegian Armed Forces. 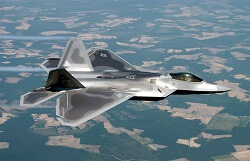 Despite today's muted reaction, Lockheed Martin Corp. (NYSE: LMT) stock will benefit as more F-35s are delivered across the world.

The three variants of the F-35 will replace legacy fighters for the U.S. Air Force, U.S. Navy, and U.S. Marines. It will also be used in at least 10 other countries.

In short, the F-35 is the largest military contract in history, with Lockheed as the principal contractor. It is part of the $1.4 trillion, 56-year F-35 Joint Strike Fighter project. Others involved include Northrup Grumman Corp. (NYSE: NOC) and BAE Systems Plc. (OTCMKTS ADR: BAESY).

The fifth-generation F-35 fighter has been in development for 14 years. The Marine Corps fielded the first combat-ready squadron of F-35s this summer. The U.S. Air Force plans to introduce the plane next year. The Navy has a target date of 2019, at which time the aircraft is expected to enter full-rate production.

With the F-35s, the U.S. military is confident it is introducing a cutting-edge weapon system capable of outclassing even modern, super-maneuverable Russian and Chinese aircraft like the Sukhoi T-50.

And the F-35 isn't the only reason Lockheed Martin stock is one of the best defense stocks on the market now...