It's obvious that China has superpower ambitions, but now we have, quite literally, a map detailing how she'll get there.

It will be on the "New Silk Road," spanning the entire Eurasian landmass – with links to Africa and Oceania, too.

Such a transport corridor is an ancient concept, but what's being built now will be far bigger and more lucrative than anything the old Han emperors could have ever imagined.

Its immediate aim is to move goods, raw materials, information, and money across borders from China to Portugal (and back) with unprecedented speed, efficiency, and of course, profitability. In fact, this is already becoming routine along the first segments of the corridor.

The New Silk Road will ultimately cement China's preeminent global status, but in the decades it will take to complete, it could make well-positioned investors very rich indeed.

You see, the multinational I'm about to show you is one of the only companies in the world with the know-how and resources to help turn China's ancient, lofty ambitions into a concrete 21st-century reality…

Realigning the World from East to West

Announced by Chinese President Xi Jinping in 2013, the New Silk Road will require the intertwining of international economics and politics on an unprecedented scale.

But… in just the last decade, we've seen the establishment of numerous cross-border government-sponsored trade and development institutions to facilitate this project.

Already armed with hundreds of billions in funding, and even more on the way, China's "road builders" are being provided with the means to put these formidable goals firmly in reach.

In fact, the first components of the New Silk Road are already in place.

In November 2014, the Yiwu to Madrid railway line, now the world's longest at 6,111 miles, was opened for business. 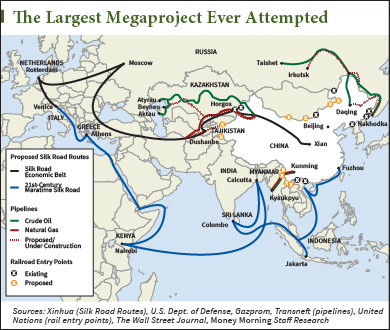 This means that goods can be shipped overland from eastern China to central Spain in just 21 days – twice as fast as the quickest sea route, and with three times less CO2 emissions than surface roads.

This is just one of the initial transport components of this New Silk Road. What's coming next is almost unbelievable…

The revival of this ancient trade route, famously traveled by Marco Polo, will boast all the modern advancement of multimodal transport infrastructure. Trains, planes, ships, and trucks will crisscross the Eurasian landmass in new record times.

Within a decade, it's expected that super-high-speed trains will get tens of thousands of tons of materials from London to Beijing… in only two days.

As you can see here, the scope of this megaproject is immense.

And that demands unprecedented financial resources, organization, and logistics.

But it's the political will and determination that's perhaps the most impressive of all.

It's all part of an unstoppable trend that will see the "developing world" establish unbreakable infrastructure, trade, and financial links with the West, even as it grows more competitive with it.

A New Challenger to Old Institutions

In 2014, I told you about how the BRICS nations – Brazil, Russia, India, China, and South Africa – were setting up the New Development Bank (NDB).

Essentially, NDB is a rival to the World Bank and International Monetary Fund (IMF), both dominated by America and Europe. The stated goal of the new megabank is to fund infrastructure projects in developing nations. Reinforcing the inclusion approach, the NDB has an Indian leader while the institution is headquartered in Shanghai, China.

Consider that grouped together, these countries' economies represent a total population of 3 billion and GDP of $16 trillion. And although membership is open to other UN member countries, the BRICS' share is not to dip under 55%, allowing them to effectively retain control.

Then in January, the free-trade zone known as the Eurasian Economic Union, whose members include Russia, Kazakhstan, and Belarus, became reality. Even Armenia, where 27% of total trade is with the European Union, and whose in-country delegation has been trying for years to coax the South Caucasus nation into joining its Western neighbors, has linked with its Eastern suitor instead.

Remarkably, even the IMF and World Bank have declared their support.

The AIIB's core shareholders are China along with India and Russia. And chief among its goals are to finance development projects along the New Silk Road.

And the AIIB is looking to hire one multinational with the "shovel power" and expertise that can help turn this ambition into reality.

Pass These Shares (and Profits) on to Your Grandchildren

Nice article. With these kind of initiatives, the whole world develops, and there is less economic pressure for resources on developed countries.