Most media tuned out once it became clear the U.S. Federal Reserve wouldn't act to raise interest rates in September.

But in doing so, the media failed to report on some illuminating predictions from the Federal Open Market Committee's "dot plot" on where they think the Fed funds rate will be in the near, medium, and long term.

What the media didn't tell you was that an FOMC member actually predicted a negative Fed funds rate – for the first time ever in Fed history.

In light of what we already know about the Fed's plans for a "War on Cash," the FOMC member's comments would seem downright scary – if we weren't so beautifully positioned for even more profits from the Fed's plan.

The Big Picture in These Little Dots

These latest "dot plot" predictions were a shocker.

It can't be conclusively proven, but it's likely that outgoing FOMC member and president of the Minneapolis Fed Narayana Kocherlakota forecast a negative rate for the end of 2015 and 2016. Kocherlakota is a dove among doves. 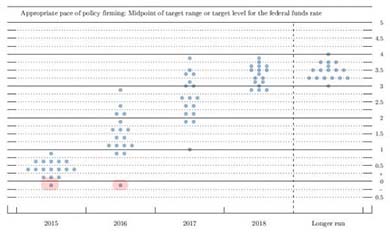 It's the first time ever that a FOMC member forecast negative rates.

Under NIRP, the central bank and commercial banks would charge interest on account balances. That means customers have to pay to leave their funds on deposit.

The intended consequence, of course, is to encourage people and businesses to spend their money, rather than leave it on deposit, since doing so brings about undesirable charges and thus a declining balance.

New spending should stimulate a higher velocity of money, stimulating the economy and generating inflation. And then we can all live happily ever after…

If only people (or, as central bankers think of them, "depositors") didn't have those pesky financial needs, goals, and dreams…

Not everyone wants to spend. Some of those savers will likely choose to withdraw their funds in cash and sock that away to avoid the NIRP costs of bank deposits.

When Yellen was asked about this during the ensuing press conference, she commented that:

"…if the outlook were to change in a way that most of my colleagues and I do not expect, and we found ourselves with a weak economy that needed additional stimulus, we would look at all of our available tools. And that would be something that we would evaluate in that kind of context."

You see, the Fed is in no position to raise rates.

So the odds that NIRP will be a tool the Fed will consider may not be that remote after all.

In fact, the New York Fed's own economists have already examined the possible consequences…

As it turns out, they concluded that we'd likely see all sorts of financial innovations to help people and businesses deal with the new reality. They even admit these could bring on new problems for banks and lenders, as well as regulators who (of course) would again be unprepared for possible new systemic risks.

Possible innovations would probably include special-purpose banks with conventional fee-based checking accounts, along with a pledge to hold cash as its only asset, kept in vaults.

Naturally, they concluded that checks from creditworthy institutions may simply be held onto for some time before being cashed, while certified checks would gain in popularity since they can be held and/or endorsed to use as subsequent payment. And further, debtors will be motivated to make advance lump sum or accelerated payments. People may even make large prepayments on their credit cards and then spend down those funds.

But most interesting is their conclusion that cash would suddenly be a whole lot more desirable. Of course, that becomes a major problem because the flock to physical cash means bank withdrawals and therefore lower amounts on which NIRP can have effect.

All of this reinforces what I've already said about the growing movement towards eliminating cash altogether. There are plenty of reasons moving exclusively to a virtual currency is extremely desirable for central planners. Being able to institute NIRP is just one major benefit.

And since this trend is just getting started, we should be able to take even more profits on one of my favorite "cashless" plays…

These Profits Have Only Just Started

Back in May, I recommended Atlanta, Ga.-based Global Payments Inc. (NYSE: GPN).

Founded in 1967, it's a leader in electronic payment processing services and is a beautifully targeted way to play the move towards electronic money.

GPN processes billions of checks, payment cards, and e-commerce transactions annually for more than 1.5 million merchant locations around the world. In fact, it has merchants and partners in 29 countries.

Its showcase product is good, but its financials look really good, too, indicating steady, sustainable growth. It sports a market cap of $7.42 billion. Revenue is up 9% from fiscal 2014, while cash-diluted earnings per share grew 18% over the same time.

The forecast for next year looks even better. Investors can reasonably expect net revenue to grow 6% to 8% in fiscal 2016.

As we're led (or pushed) into becoming a cashless society, look for Global Payments to be a steady, standout gainer.

the main body of dots in 2016 is 1% or above, still NIRP could be a policy of interest rates lagging inflation. the inflation figures for energy are backloaded, when those energy numbers fall off the y-o-y measure then inflation will tick higher (than 1%). i think the fed knows this and this their plan although it could be energy won't follow the script, it would probably go higher. i like TIPs, but there must be something better.