Chinese corporations and investors have been hunting overseas for bigger profits, and they're finding them in the United States.

This is not a new trend. Some $50 billion of foreign direct investment (FDI) has fled China since 2010, spanning several U.S. industries.

But the pace picked up considerably this year...

In just the first six months of 2015, Chinese companies poured a massive $6.4 billion into U.S. investments - a record half-year high. And 80% of the $17 billion that China's state-owned enterprises have invested in the United States since 2010 came this year alone.

Most of the investment is directed at one U.S. industry - and two new developments in Chinese regulation mean this trend is not letting up.

Today I'll show you why this cash flow will continue, and the best way you can make money from it now...

Some of the most sought-after U.S. industries for Chinese investors over the past few years have been energy, agriculture and food, and information and telecom.

The following chart breaks down China's investment into U.S. industries since 2013: 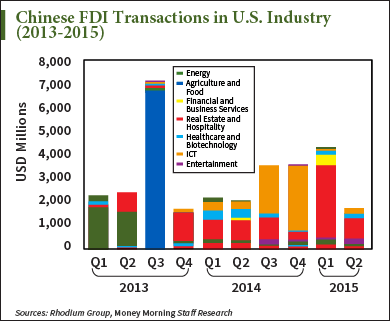 Financial services has been attractive because it allows Chinese businesses to instantly tap capital resources, industry-specific knowledge, and an established clientele.

The attraction of information and telecommunications (ICT) stems from a desire to move up the value chain. China's new focus on transitioning to a consumer-based economy inevitably supports domestic consumption. And that means even more of what most people in developed economies take for granted: electronics and appliances like smartphones, tablets, televisions, home appliances, and automobiles. All of these require increasing amounts of software and hardware, like apps and computer chips, to run.

That explains the mega-move China's state-owned Tsinghua Unigroup made in July 2015 to buy Micron Technology Inc. (Nasdaq: MU). Micron is one of the world's largest semiconductor providers and the last U.S. supplier of dynamic random access memory (DRAM), which is key to personal computers.

The $23 billion offer would make for the largest U.S. corporate takeover by a Chinese corporation. Of course, there's considerable risk U.S. authorities will nix the deal, citing concern for national security.

But the most consistent China FDI attraction since 2013 has been U.S. real estate and hospitality.

In the past year, U.S. commercial real estate and hotels account for 40% of Chinese investment, up from 11% in 2013. The sector dominated the first half of this year.

For a cool $1.95 billion, China's Anbang Insurance became the Waldorf's proud new owner. When Anbang Insurance bought the hotel in February, it ranked as the largest deal ever by a Chinese investor for an American building.

One reason U.S. real estate is so attractive to Chinese investors is low rates. In addition, two game-changing shifts from China last year also sparked the recent leg up...