Lockheed Martin stock just received a huge catalyst this morning after the company announced a $262.8 million contract with the U.S. Air Force.

The agreement, announced Monday, is the first major deal of the biennial Dubai Airshow. Launched in 1986, the show booked a record $200 billion in orders in 2013. The spectacle runs through Thursday.

Under the contract, Lockheed Martin will collaborate with Advanced Electronics Company (AEC) to perform sniper sustainment services and upgrades at the Sniper Expanded Repair Capability facility in Saudi Arabia. AEC is a Saudi-based company focused on electronics manufacturing, system integration, and repair and maintenance services 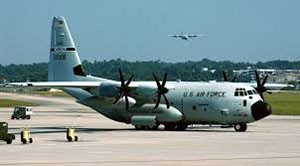 The U.S. Air Force, Lockheed Martin, and AEC will collaborate to complete training and specific sustainment efforts, including maintenance on line replaceable units, logistics, and upgrades.

The deal comes as Saudi Arabia and the United Arab Emirates have been leading the war in Yemen against the country's Shiite Houthi rebels since March. The two are also part of the U.S.-led coalition bombing the Islamic State group in Syria and Iraq.

The multimillion dollar contract is a huge win for Lockheed, and it's just one reason to be bullish on Lockheed Martin stock...

Why Lockheed Martin Stock Is a Buy (NYSE: LMT)

The F-35A Lighting II is an innovative fifth-generation fighter jet. Lockheed Martin describes it as "combining advanced stealth with fighter speed and agility."

The three variants of the F-35 will replace legacy fighters for the U.S. Air Force, U.S. Navy, and U.S. Marines. It will also be used in at least 10 other countries.

In short, the F-35 is the largest military contract in history, with Lockheed as the principal contractor...