As it turns out, Black Friday's best sales were not in electronics, clothing, or gadgets. Instead, they came from today's gold price.

That's because on the biggest shopping day of the year, gold prices hit a new six-year low.

But as you'll see, while the near-term reasons for a lower gold price are familiar ones, the reaction to these low prices was not typical…

The U.S. Dollar Index (DXY) is widely watched and has a significant effect on gold prices. And that's even more the case when the DXY approaches what is considered a relevant "psychological level."

That's exactly what has been happening over the past week.

On Wednesday, Nov. 25, the U.S. Dollar Index challenged the 100 level for the first time March this year.

Here's how its action looked on Wednesday:

But then Friday, it saw renewed strength… 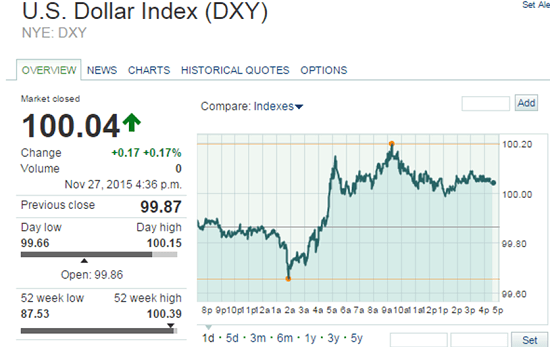 Although on a percentage basis the gain in the dollar was small, its trading above 100 had a strong psychological impact on traders who decided to dump gold wholesale.

And this is what predictably weighed on gold as America was busy shopping. Interestingly though, gold was not dumped by everyone.

How Gold Prices Moved as the Dollar Was Strong

Here's how the gold price behaved on Black Friday, Nov. 27:

After becoming quite oversold, it reversed and climbed higher again to peak at $1,061 just after 9:30 a.m.

But then the bears once again took charge and pushed gold back down to $1,057, a level around which it traded and eventually closed the day.

However, that's not the whole story. There's one anecdotal indicator that could push gold higher soon…

If FED increases or give an indication to increase the interest rates hedgers will not buy gold rather they will shed off some more off their bullion which will result in more slump in gold price. Even if Fed doesn't raise the rates the gold will not appreciate much as high end traders will be watching for Fed's next move. If they are convinced that that the USD rate upward revision is not going happen for few months they will go gold but it won't make any massive increase in price appreciation of gold as hedgers would like to keep the exposure to gold minimal at this stage.