A storm that's been brewing in the South China Sea for 200 years now threatens to disrupt the world's financial markets.

"The plot in the South China Sea just keeps getting thicker," Money Morning Executive Editor Bill Patalon told readers on Dec. 8. "And riskier - on both sides of the dispute that keeps escalating there." Exactly what is the South China Sea dispute?

Here's the historical context that lends perspective to this contentious territorial conflict...

What Is the South China Sea Dispute? A Historical Squabble

Arguments over which country owns what part of the South China Sea region are seemingly endless. China contends that since 200 BC, its people have fished the Spratly Islands. Indeed, archaeologists have found Chinese-made pottery throughout the South China Sea land masses that date as far back as the 5th century.

But for the purpose of delivering a more digestible look at the South China Sea dispute's history, the focus here is set on the biggest conflicts.

To that end, let's fast forward to World War II...

Japan occupied the Spratlys and the Paracels in 1939 and claimed jurisdiction. With American help, Chinese forces pushed out the Japanese occupiers in 1945. And in 1952, Japan renounced any claims of sovereignty over the Spratlys and Paracels.

However, no beneficiary was named.

The establishment of the EEZ created the potential for overlapping claims in semi-enclosed seas such as the South China Sea. These claims could be extended by any nation that could establish a settlement on the islands in the region. South China Sea claimants have clashed as they tried to establish outposts on the islands (mostly military) in order to be in conformity with Article 121 in pressing their claims. 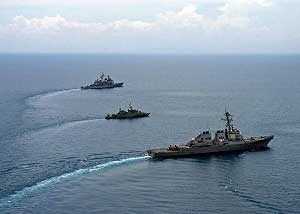 The Spratlys lie in a shallow section of the South China Sea west of the Philippine archipelago. Tomas Clomas, a Manila lawyer, visited the islands in 1956, claimed them for himself, named them Kalayaan (Freedomland), then asked the Philippine government to make them a protectorate. Filipinos still refer to them as the Kalayaan Islands.

In 1978, former President of the Philippines Ferdinand Marcos made formal claims by declaring that 57 of the islands (out of roughly 250 in the South China Sea) were part of Palawan Province by virtue of their presence on the continental margin of the archipelago. The Philippine military, which first occupied three of the islands in 1968, continued to garrison marines on several islands.

Nevertheless, following their conquest of South Vietnam in the spring of 1975, units of the People's Army of Vietnam (PAVN) moved to occupy the Spratly Islands (previously held by the Saigon regime). In 1978, Vietnam and the Philippines agreed to negotiate, but ultimately failed to settle their conflicting claims to the Spratlys.

In a 1988 incident, the ongoing dispute between China and Vietnam over sovereignty to the Spratly Islands erupted into an unprecedented armed encounter dubbed the "Johnson South Reef Skirmish." A brief naval battle between the nations took place at Spratly's Johnson South Reef on March 14, 1988. Vietnam was ultimately outgunned and was forced to withdraw.

Vietnam's repeated calls for China to settle the dispute diplomatically won rare support from the international community, but elicited little response from Beijing. A conciliatory mood developed on both sides of the Sino-Vietnamese border in 1989, partly because Vietnam's proposal to withdraw completely from Cambodia responded to a basic Chinese condition for improved relations.

In mid-1991, fresh from diplomatic success in helping to end the Cambodian civil war, Indonesia took the initiative in seeking to open multilateral negotiations on competitive South China Sea claims - especially those claims involving jurisdictional disputes over the Spratly Islands.

Most of these claims are historical, but they are also based upon internationally accepted principles extending territorial claims offshore onto a country's continental shelf, as well as the 1982 United Nations Convention on the Law of the Sea (UNCLOS).

That's also where the United States' involvement comes in...

As Kampuchea Krom ( Cochinchina or South Vietnam) belonged to Cambodia for centuries until the French colonial power unilaterally ceded it to Vietnam as recently as June 1949, Cambodia should exert her full rights to claim the Spratly Islands too. Why not?