For the third time in seven years, retirees were disappointed when they got a look at their first Social Security check of the year.

The reason is that the measure of inflation the government uses to determine Social Security COLAs indicates no inflation occurred in those years.

What the government would prefer you didn't know is that the measure of inflation it uses ensures the Social Security COLAs are lower than they ought to be.

You see, the government produces several different measures of inflation. 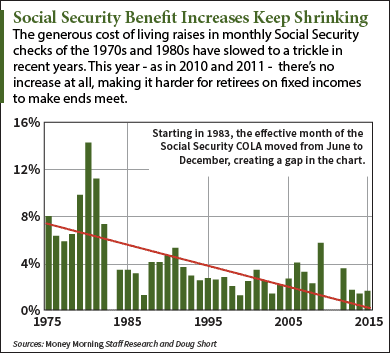 By law, the Social Security Administration must use the CPI-W, short for Consumer Price Index for Urban Wage Earners and Clerical Workers.

It's calculated monthly by the Bureau of Labor Statistics, part of the U.S. Department of Labor. The CPI-W measures inflation among working class folks, but is not the CPI-U figure you hear about in the media.

And the averaged CPI-W in the third quarter of last year (June to September) registered a 0.4% decline from the CPI-W in Q3 of 2014.

Luckily, a decline in the CPI-W does not mean Social Security benefits are cut, just frozen. But for retirees struggling to make ends meet, that's bad enough.

And by the way, retirees might not get a bigger Social Security check in 2017, either…

This Rule Could Kill the 2017 Social Security COLA

That's because the CPI-W number from Q3 of this year will be compared not to last year's lower figure, but to the higher 2014 number. The rule says the CPI-W to be used must be from "the last year in which a COLA became effective."

So even if there is a Social Security COLA for 2017, it will be smaller than it should be. Retirees will get cheated again.

"Think of the senior citizen on a tight budget," David Leland, a managing director with Merrill Lynch in Boston, told U.S. News & World Report. "They're getting a zero percent COLA, nearly zero percent interest on savings, and healthcare expenses are taking off."

What's galling here is that the government has a ready alternative to the CPI-W that would result in more accurate Social Security COLAs.

Why Social Security Benefits Should Be Based on This Instead

It's called the CPI-E – the Experimental Price Index for the Elderly. It's been calculated since 1987. And it is specifically designed to track inflation as it affects Americans 62 and older, who tend to spend more on some categories (like healthcare) and less on others (like transportation).

Had the government used the CPI-E instead of the CPI-W in calculating the 2016 Social Security COLA, retires would have received an increase of 0.6% this year – worth as much as an extra $44 a month.

It's just one more way the government has rigged the system to its own benefit at the expense of retirees.

But that doesn't mean Social Security recipients are helpless.

Just because your monthly check didn't go up doesn't mean you can't get a boost in your Social Security benefits.

And there's a chance you could be eligible for a really big boost.

Social Security Advisors, a high-end consultancy firm in Manhattan, says 71% of married couples are missing out on an average of $120,000 in Social Security benefits.

That would more than make up for the increase retirees didn't get this year.

But these benefits aren't widely publicized. You need to know how to apply for them.

To find out more about this special package — and how to get everything you're entitled to from Social Security — click here.

This thing hasn't quite gone to the "moon" has it? It would definitely speak to your integrity if you would comment coherently about why it's performance is SO dismal!!