While the Ted Cruz tax plan has several features that would promote economic growth, it also has an Achilles' heel that could severely undermine its benefits.

The Cruz tax plan would radically change how Americans pay taxes, making it simpler for both individuals and businesses. Just about everyone comes out ahead.

The average taxpayer will find a lot to like in the Ted Cruz tax plan. It eliminates the federal payroll taxes for Social Security and Medicare while reducing the income tax rate to a flat 10%, wiping out the current seven tax brackets. 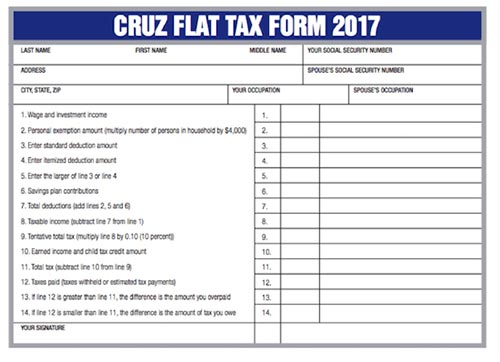 The Ted Cruz tax form fits on a postcard.

Middle-income households, on average, would pay $1,800 less a year. And because Sen. Cruz (R-TX) would increase the standard deduction to $10,000 for individuals and $20,000 for couples, few would need to use itemized deductions.

The Ted Cruz tax plan also eliminates the Alternative Minimum Tax as well as the estate tax (derided by many conservatives as the "death tax").

Meanwhile, the corporate tax rate would drop from 35% to zero. The only exception would be existing foreign profits, which multinational corporations could repatriate at the 10% rate. Future foreign profits would not be taxed.

Cruz maintains that his tax plan is so simple that he could virtually eliminate the Internal Revenue Service. In campaign speeches he often brags that most Americans will fill out their taxes on a form the size of a postcard.

Of course, these changes would wipe out some $29 trillion in federal tax revenue over the first decade, according to the Tax Foundation.

Now, the Ted Cruz plan does include a new tax to recapture most of that lost revenue - and this is the problem...

The One Big Problem with the Ted Cruz Tax Plan

The primary source of revenue in the Ted Cruz tax plan is something Cruz euphemistically calls the Business Flat Tax - but a better name for it might be the Trojan Horse Tax. This type of tax is like handing Washington a blank check.

Cruz's Business Flat Tax is a 16% tax on the value that a company adds to its product minus what it pays to produce that product. The total of the taxes paid by the chain of companies is reflected in the final price paid by the consumer.

In other parts of the world, this is called a Value-Added Tax, or VAT. It's used in Europe and Japan. In all, 160 countries have a VAT; the United States is the only developed economy without one.

One reason governments like VATs is because the consumer doesn't really see how much they're paying in taxes. Unlike a sales tax, which is tacked on to the sales price, a VAT is built in to the price of everything bit by bit. In other words, a VAT is already included in the price tag.

And because VATs are much less visible to consumers, they're much easier to raise without creating a voter backlash.

Conservative Republican presidents - like a President Ted Cruz - would be unlikely to raise a VAT.

But a liberal Democrat in the White House would view VAT increases as an ideal way to generate revenue to pay for social programs and bigger government.

Japan launched its VAT in 1989 at a modest 3%. Over the years the Japanese VAT has been bumped up several times. Last year it was raised to 10% - more than triple from where it started.

"To be blunt, unless there's a magic guarantee that principled conservatives such as Rand Paul and Ted Cruz (and their philosophical clones) would always hold the presidency, a VAT would be a very risky gamble," wrote Cato Institute senior fellow Daniel Mitchell in the National Review.
A VAT would also spur inflation, as the cost of all goods would spike to accommodate the tax.

Then there's the issue of what the Ted Cruz tax plan would do to budget deficits and the national debt.

According to the Tax Foundation, the Cruz VAT would generate $25.4 trillion over 10 years on a static basis, leaving it $3.67 trillion short of covering the revenue lost.

Even a best-case scenario, in which the tax cuts trigger an economic boom, leaves a hole of $768 billion.

And that doesn't take into account the nation's existing budget deficits. A January estimate by the Congressional Budget Office, the annual federal budget deficit will grow from $561 billion in 2017 to $1.2 trillion in 2026. The cumulative total will add $9.38 trillion to the national debt, which recently soared past $19 trillion.

Adding to the budget deficit and national debt contradict the Texas senator's basic policy positions. (Yes, Cruz does offer ideas for $500 billion of savings on his campaign website. But that's also spread over 10 years and falls far short of the trillions in savings needed to balance the budget.)

And the assessment by the Tax Foundation was among the friendliest to the Ted Cruz tax plan. An analysis by the Tax Policy Center estimated a 10-year shortfall of $8.6 trillion.

The Ted Cruz tax plan gets credit for simplifying a needlessly complex tax code as well as for encouraging business growth. But the slippery slope of the VAT, and the risk of adding to the already dangerous national debt, means this plan needs some rethinking.

The Bottom Line: The Ted Cruz tax plan would completely revamp the U.S. tax code. It would reduce or eliminate most existing taxes in favor of a VAT tax. But because a VAT is hidden in the sticker price of goods and services, it's easy for governments to jack them up whenever they need more revenue. And the Cruz plan as designed would also deepen federal budget deficits. If Cruz were president, he'd need to make serious adjustments to this plan.

Beyond Obamacare: As controversial as Obamacare has been, it doesn't go nearly far enough for Bernie Sanders. His healthcare plan proposal, "Medicare for All," is essentially the single-payer type of system common in much of Europe and Canada. In short, the government runs the healthcare system, and everyone is covered for everything. Sounds great. But you'll be shocked when you see what it's going to cost...