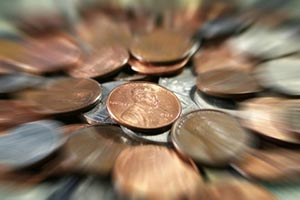 It's not easy to find a truly compelling penny stock, which is why this one is such a remarkable find.

Not only is this green energy stock capable of a gain of 100% or more, it's just now rolling out technology with the potential to rescue the struggling coal industry.

At first glance it doesn't even look like a penny stock. It trades at about $7 a share. But that's only because of a 1:12 reverse stock split in December. The reverse split was necessary to avoid delisting on the Nasdaq, which warned the company in August that shares had traded below $1 for 30 consecutive days.

In fact, this company's story up until now looks like that of a lot of woebegone penny stocks. The company hasn't reported a profit since 1997. And its stock chart is downright frightful. This penny stock is down 78% over the past two years, 51% over the past year.

And yet here I am telling you this is a penny stock to buy...

The reason is that this penny stock has positioned itself for a stunning reversal of fortune.

This is a turnaround story with mind-boggling profit potential. Let me tell you more about this extraordinary penny stock...

A Penny Stock on the Cutting Edge of Green Tech

The penny stock I'm talking about is FuelCell Energy Inc. (Nasdaq: FCEL). It's in the hydrogen fuel cell business, and for the past decade has specialized in onsite "microgrid" fuel cell power plants.

That business is just now starting to gain traction, in part because FCEL can design, build, and operate them, and in part because it has developed technology that make its fuel cells more efficient.

The Pfizer project is one recent big win that produces 5.6 megawatts (MW) for the drug maker's Connecticut research facility. But FuelCell Energy has more in the pipeline. It says municipalities as well as companies are expressing interest in adding microgrids. It's currently building 16 MW worth of projects in California, Connecticut, and Germany.

In its most recent quarter, FCEL reported that its revenue backlog had grown by $66.9 million to $403.9 million, a year-over-year increase of nearly 20%. The company estimates fuel cell power generation to be an $18 billion market.

FuelCell Energy will take its first big bite of that this year with its $500 million, 63 MW Beacon Falls project.

That's all very promising. But the carbon-capture technology is what makes FCEL a penny stock you'll want in your portfolio.

It literally can save the coal industry.

Because it's such a "dirty" fuel, environmentalists and climate change advocates have pushed for years to reduce its use as a source of electricity.

They're succeeding, at least in the United States. A decade ago coal-fired plants supplied half of the nation's electricity. The U.S. Energy Information Administration projects coal's share will drop to 32% in 2016, putting it behind natural gas for the first time.

Low prices and the benefit of burning cleaner has prompted a large-scale switch to natural gas in recent years. 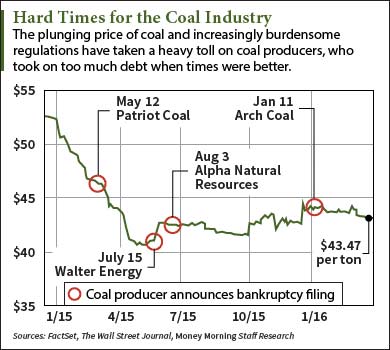 But the regulatory "war on coal" has had the greatest impact. It stepped up last April when the U.S. Environmental Protection Agency's Mercury and Air Toxics Standards (MATS) went into effect. The stricter rules were a key factor in the retirement of 15 MW of coal-fired generation in 2015.

These developments, along with falling global demand, have devastated the nation's largest coal producers. Four coal producers have filed for bankruptcy over the past year, including Arch Coal Inc. (OTCMKTS: ACIIQ) in January. On Wednesday Peabody Energy Corp. (NYSE: BTU) warned it could be next.

And yet as bad off as the coal industry is today, FuelCell Energy can save it - and make itself a mountain of money in the process.

FuelCell Energy's Tech Is a Win-Win-Win

Today's coal plants are in a tough spot. To capture 90% of the carbon dioxide they produce, the plants need to adopt solutions that increase the cost of power generation by 80% while reducing power output by 20%. Meanwhile, the release of other pollutants, such as nitrogen oxide, actually increases.

No wonder coal plants are shutting down.

But FuelCell Energy's solution radically changes the equation. Its carbon-capture technology can eliminate 90% of a plant's carbon dioxide while increasing power output 80% and increasing costs by only 33%. And FCEL's solution decreases the release of nitrogen oxide by 78%.

FuelCell Energy manages this miracle by passing the plant's emissions, along with ambient air, into its direct fuel cell stack. The stack becomes a carbon purification membrane, which concentrates the carbon dioxide and makes it easy to remove.

But the process also powers the fuel cells, which generate the extra electricity, while destroying most of the nitrogen oxide, the main ingredient of smog.

FCEL has been working on this technology for several years, and is very close to taking it commercial. Right now it is working with the Department of Energy as it seeks a site to test the technology on a large scale.

Once FuelCell is able to demonstrate this carbon-capture solution to the coal industry, it will have customers lining up to buy it. They almost don't have a choice. 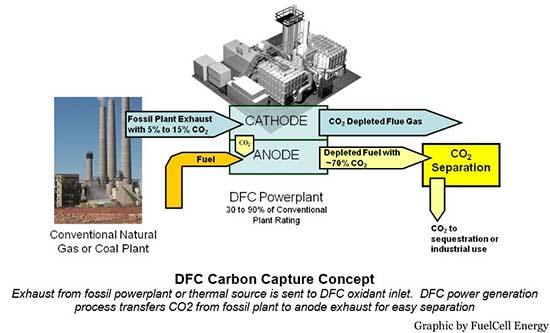 And having economically viable, EPA-compliant coal power plants, thanks to FCEL's technology, will revive the coal industry.

But the opportunity doesn't stop with coal plants. The technology works with natural gas plants as well.

This is a big deal. FuelCell has come up with a "bridge" technology that enables the use of fossil fuels in power plants without further damaging the environment while green alternatives such as fuel cells, solar, and wind continue to mature.

FCEL says the steel and cement industries can also use its carbon-capture technology.

Obviously, Wall Street hasn't yet grasped the full potential of this penny stock.

Why Penny Stock FCEL Is Destined to Move Much Higher 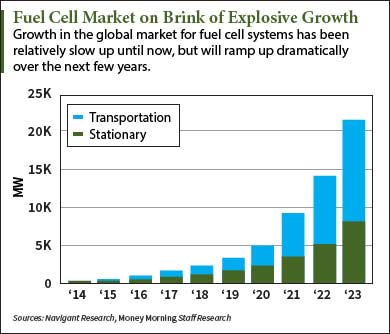 The fuel cell systems market has until now grown slowly, but that's about to change. The megawatt capacity of systems shipped is expected to triple by 2019, triple again by 2021, and triple again by 2023. FuelCell Energy says its total addressable market is about $50 billion.

No doubt a string of poor earnings reports has kept this penny stock off the radar of most investors. Last week's Q1 2016 report was no different (FCEL's quarter ended Jan. 31). The company lost $0.48 per share, well below the loss of $0.35 a share Wall Street had forecast.

But this is a company at its nadir right now. As more projects come online, sales will grow, as will margins. Not that it will happen overnight. Business from governments and utilities are subject to long bidding processes, and projects can take many months or years to plan and build.

Patience will be rewarded, however.

The Yahoo! Finance one-year price target on FCEL stock is $14.33, double the current price. But with this penny stock, it makes more sense to stretch your time horizon to three years. That gives FuelCell Energy time to fatten its contract pipeline, which will boost revenue to multiples above last year's $163 million.

FCEL's price-to-sales ratio is only 1.24, significantly lower than its peers Plug Power Inc. (Nasdaq: PLUG) at 5.41 and Ballard Power Systems Inc. (Nasdaq: BLDP) at 3.85. That alone implies that FCEL stock is undervalued.

For purposes of illustration, let's say FuelCell Energy is able to grow revenue to $500 million by 2019, not all that crazy as the analyst consensus for 2017 is $245 million.

Should the price-to-sales ratio remain the same, the implied FCEL stock price is $21.85 - triple today's price. Should the P/S ratio rise to the S&P 500 average of 1.77, the implied price is more than $31 - more than four times the current price.