The Valeant Pharmaceuticals International Inc. (NYSE: VRX) stock price soared 15% to $29.91 today after the company said no additional restatements are necessary after an internal audit.

While this may seem like a major resolution for the company, Valeant and the VRX stock price are not out of the woods yet. But before we get to that, here's the full story behind today's Valeant stock price jump… 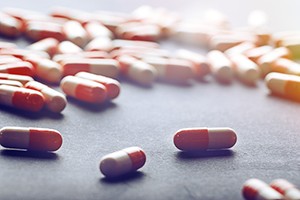 Valeant announced Tuesday an ad hoc committee completed its review of the company's relationship with specialty pharmacy Philidor Rx and related accounting matters. The committee did not identify any items that would require additional restatements.

Valeant will now dissolve the ad hoc committee and pass oversight to the 12 independent directors on its board, including members of its audit and risk committee. According to the company, the committee held over 70 interviews and reviewed over one million documents over the course of five months.

Valeant said it continues to work diligently and is on schedule to file its 10-K on or before April 29, 2016.

Valeant technically fell into default on March 15 when it failed to file its 10-K. Debtholders are closely monitoring the April 29 deadline.

In attempts to appease anxious creditors, Valeant is offering them a fee and an increase in the interest rate on the debt in exchange for waiving the default and an amendment to its credit agreement.

The deadline for creditors to accept or decline the new term for Valeant's $11 billion of secured loans is Wednesday. Valeant needs at least half of the investors holding the secured loans to agree to the new package for the amendment to move forward.

Getting half will be difficult with some creditors resisting the new terms.

According to Bloomberg, those pushing back want a higher interest rate and a better fee. They also want to enforce some restrictions on the terms the company is offering.

Today's news was obviously a relief to shareholders who sent the VRX stock price soaring. And while some are buying into Valeant stock today, we are still very bearish on the company. Here's why…

Why We're Still Bearish on the VRX Stock Price in 2016

The VRX stock price plunge began last fall amid a federal investigation into its drug-pricing practices and a scathing report from short-seller Citron Research over its relationship with specialty pharmacy Philidor Rx.

Citron went as far as to liken Valeant to Enron. Following all the damaging press, pharmacy benefits managers CVS Health, Express Scripts, and UnitedHealth OptumRx announced they would stop working with Philidor and Valeant.

Valeant grew rapidly as a serial acquirer of smaller companies. With each acquisition, Valeant cut research costs. It also domiciled in Canada for a lower tax rate.

He cited Valeant's practice of bankrolling acquisitions with junk-bond financing, firing most of its employees, and hiking the prices of the drugs it had just purchased the rights to.

At last check, Valeant shares were changing hands at $28.02. That means the VRX stock price is still down a punishing 72.32% year to date.

Today's jump for the VRX stock price is just a short-term movement. We still recommend avoiding Valeant shares for the foreseeable future.