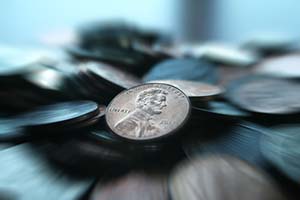 Nearly all of this week's top five penny stocks posted triple-digit gains, with the No. 1 penny stock boasting gains of nearly 525%.

We release a new top penny stocks list every week for our readers. We explain why these penny stocks posted big gains and give readers a snapshot of their companies…

Most of the top penny stocks we follow appear on the most reputable exchanges, such as the New York Stock Exchange or Nasdaq. These exchanges have stricter standards than Over-the-Counter (OTC) stock exchanges.

For instance, the Nasdaq wants listed companies to have an aggregate cash flow greater than $27.5 million in the prior three fiscal years, among other requirements.

And one of the requirements for the New York Stock Exchange calls for companies to have an aggregate pre-tax income of at least $10 million for the last three years.

While penny stocks on these two exchanges almost never trade for less than $1 (or else they'll be kicked off the exchange), they mostly trade for $10 or less. And they come with far less risk than OTC penny stocks.

Risk is the most important thing to understand when investing in penny stocks. These bargain stocks can bring you windfall profits, but are also known for big upswings and downswings. That's why Money Morning experts recommend limiting your portfolio to just a few high-quality penny stocks.

Money Morning Chief Investment Strategist Keith Fitz-Gerald also says it's vital to have the right mindset when searching for penny stocks. Not every penny stock will return you huge, triple-digit gains like the ones on our top five list. And the stocks that have surged one week might tank another.

That being said, here are our top five penny stock gainers this week…

Top Penny Stocks No. 5: VBI Vaccines Inc. (Nasdaq: VBIV) is a biotech company that develops technology to protect vaccines. VBIV stock surged almost 80% this week as the company announced it was merging with SciVac Therapeutics. The combined company has a licensed hepatitis B vaccine and an expanded pipeline to cater to underserved markets. The stock is trading at $3.98 per share as of Thursday intraday and is up nearly 60% year to date.

Top Penny Stocks No. 4: ChemoCentryx Inc. (Nasdaq: CCXI) is a biopharmaceutical company that discovers and develops drugs to treat autoimmune diseases. The company is currently in its clinical stage. CCXI stock jumped nearly 100% this week after the company announced it had an R&D day on May 11 and was joined by several prominent physicians. The stock is trading at $4.10 per share as of Thursday intraday.

Top Penny Stocks No. 3: Synacor Inc. (Nasdaq: SYNC) provides multiscreen experiences (start pages and homes screens), Cloud ID, and advertising for its clients. SYNC stock surged 130% this week after the company reported strong quarterly earnings. Synacor had revenue of $30.30 million for the quarter, which beat out the consensus estimate of $28.6 million by $1.7 million. The stock is trading at $3.24 per share as of Thursday intraday and is up nearly 87% year to date.

Top Penny Stocks No. 2: MGT Capital Investments Inc. (NYSEMKT: MGT) owns and operates social gaming sites in the online and mobile space, such as MGTplay.com. The company has an ownership stake in DraftDay.com, which is a big fantasy sports betting platform. MGT stock spiked over 230% this week after the company announced its new high-profile CEO John McAfee, the famed founder of the eponymous antivirus software, McAfee. The company announced its new focus will switch from online gaming to focus on security and privacy. MGT stock is trading at $1.81 per share as of Thursday intraday and is up nearly 665% year to date.

Top Penny Stocks No. 1: Cinedigm Corp. (Nasdaq: CIDM) is an entertainment company that distributes and aggregates independent movies, software, and other digital content. The company has a relationship with over 60,000 physical and digital retailers, such as Wal-Mart and Target, according to its website. CIDM stock surged 532% this week after the company reported it had 2 million app downloads and over 400,000 registered users as of March 31, 2016, according to Insider Financial. The stock was trading at $1.55 per share as of Thursday intraday and is up nearly 480% year to date.

This Penny Stock Will Double Your Money – and Save a Dying U.S. Industry: It's hard to find a penny stock that's truly compelling, which is why this one is special. Not only is this green energy stock capable of a 100% gain or more, it's just now releasing technology with the potential to save the dying coal industry. But this stock's success story has only just begun, making now the perfect time to buy this stock…