Monday morning, Deutsche Bank AG (NYSE: DB) stock hit a record low, dropping 6.5% to below $12. So far this year, the embattled bank has lost more than 50%.

As I warned you in February, Deutsche Bank is the proverbial canary in the coal mine of the global financial system. It poses systemic risk because it is poorly managed, even more poorly capitalized, and party to $60 trillion of derivatives contracts.

Now the U.S. government is chasing it down for billions of dollars of penalties on fraudulent mortgages it sold before the financial crisis, but German Chancellor Angela Merkel has said that the German government will not bail out the bank if it runs out of money. This is a recipe not only for DB stock to drop to where global interest rates are - zero - but to damage the rest of the financial system on the way. 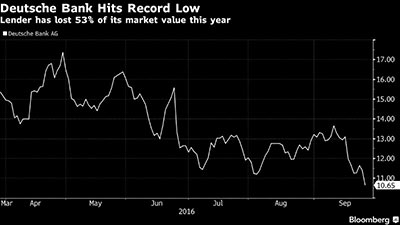 We Are Witnessing the Beginning of a Long Unraveling

The problem with situations like these is that they gain downward momentum from which it is very difficult to recover. Financial institutions rely on the confidence of their counterparties and customers to stay in business. As we learned in 2008 with Bear Stearns and Lehman Brothers, when that confidence falters, bad things happen.

Don't Miss: The One Bank That Will Blow Up the World

The world is finally starting to wake up to the fact that it should not have confidence in DB's ability to meet its obligations. This means that the bank's capital structure could crumble, starting with its stock price. I expect DB stock to end the year in the low- to mid-single digits.

My recommendations for DB remain the same: