Globally, central bankers have cut interest rates nearly 700 times since the crisis in 2008, to the point that they're at the lowest levels in 5,000 years.

They're doing this to boost inflation, we all know, but so far it seems the only inflation they've been able to create is in stocks. The S&P 500 is up more than 200% since the 2009 bottom, despite the slowest U.S. economic growth in 70 years.

But it turns out you can't baste the global economy with $12 trillion in newly printed "funny money" without precipitating some consequences.

That inflation the bankers have been looking for for nearly a decade now is just a trickle, but I've got some evidence that it's about to become more of a runaway firehose. It was headed this way even before Donald Trump vowed to weaken the dollar to boost U.S. competitiveness.

This inflationary trend is boosting one asset class in particular, ahead of most others - that's why it's still "unloved" and trading at a tidy discount right now.

I've been telling you recently that rising long-term rates are an early sign of inflation.

That's because bond investors sell as they sense inflation is beginning or increasing. That selling pressure pushes down the value of long-term bonds to "match" what the market thinks interest rates should be.

But rising bond yields aren't the only way to tell what's happening with inflation.

Economic indicators, like the U.S. Consumer Price Index (CPI), can provide insight. Just recently, the Labor Department reported the CPI had risen 0.3% in September, following closely on a 0.2% rise in August.

If we consider the 12 months ending in September, prices are up 1.5%, providing for the largest rise in nearly two years.

The Fed's favorite way of tracking inflation is through the U.S. personal consumption expenditures (PCE) price index. That was up 0.2% in September and has increased 1.2% on a year-over-year basis.

Even wages are showing signs of life. In Q3, they were ahead 2.4% over the previous year, providing for the largest gain in seven years.

In China, prices are looking up as well. Manufacturers have provided the first positive Producer Price Index reading in four years.

Runaway Inflation Will Bring Huge Profits to This Class

We've already been warned by Fed head Janet Yellen and Bank of England boss Mark Carney that they're glad to let inflation run past their target levels for some time before substantially tightening through rate increases.

Of course high inflation will crush bonds as their yield becomes increasingly unattractive.

But one sector that's benefiting from this nascent rise in inflation is real assets. 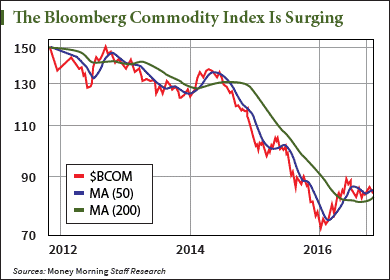 Since then, resources have gained in value as inflation seems to have taken root. BCOM is up 16.5% since January, and there's likely more in store.

I'm not the only one who thinks so...

Going all the way back to 1925, real assets like commodities, real estate, and collectibles, when compared to financial assets like large-cap stocks and long-term bonds, have never been so cheap.

Given how the unprecedented $12 trillion in QE has helped to inflate both stocks and bonds to all-time highs, it's not a complete shocker that real assets would have become relatively dirt cheap in the process.

But no trend lasts forever. And just like long-term bonds appear to have put in a 35-year top, the opposite looks to be true of real assets. 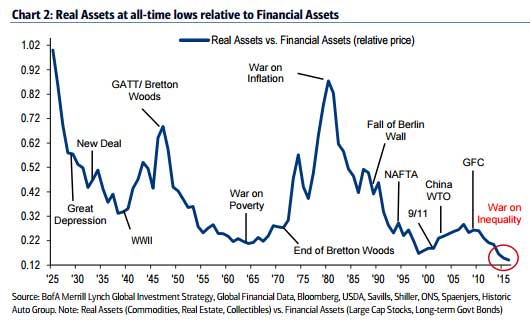 Like Hartnett suggests, an environment of rising inflation is highly supportive of real assets. So here's a simple way to gain exposure to the cheapest sector around.

The Easiest Way to Play the Real Asset Boom Ahead