When I was growing up, a trillion dollars was a lot of money. Maybe that's why I think the full-on rout in the bond market, which has shed as much money since the election, is historically significant.

Bonds are caught in nothing less than a textbook "perfect storm," which I think heralds the bitter end of a secular, decades-long bull market.

That's critical for bonds and bondholders, of course, but it's important for the stock market, as well.

Let's take a look at this chart and I'll show you why... 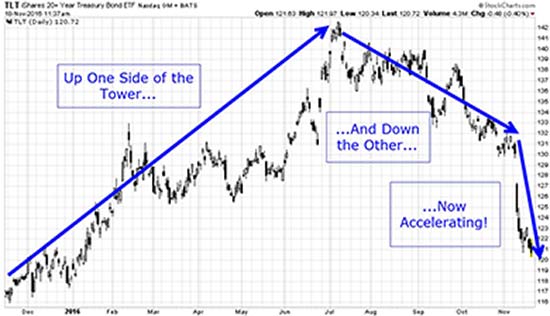 The macro "ingredients" for the rout I mentioned are...

What these three factors add up to is a global bond meltdown.

I believe we are entering a period during which bond prices could go down for years - and maybe longer.

My Stealth Profits Trader readers just took in a quick 30% on our ProShares UltraShort Lehman 20+ Year ETF (NYSE Arca: TBT) trade. I don't see that trade turning unprofitable anytime soon, even if we do see some bond price pops in the near future.

Stocks, of course, are a different story...

What do think of Harry dent say market is due to crash bad in simple words.

Good analysis on the bond side as well as your bond call. I totally agreed with you on the bond side, and it is exactly what I believe as I posted on my consulting business web page on FB since July this year.