I'll be blunt: This is the perfect time to lay into ample supplies of gold and silver. I think that, here at the start of 2017, we're on the cusp of a good strong bull run for both metals.

After a frustrating second half of 2016, I see several undeniable reasons why demand will tighten up and prices for both of these popular investments will begin to surge.

I'm going to show where I think gold and silver will go in the short term and give you four reasons why I think precious metals investors could have an even better year than they think.

I believe we've seen the bottom, and the future prospects look bright, so let's take a look at my price forecast.

Metal Bears Are Running Out of Excuses

This hasn't always happened in the past, but the price of gold in 2016 suffered as a direct result of the market's reaction to a hike in the fed funds rate. For instance, in just the two hours following the Fed's Dec. 14 decision, gold plunged $19.

You can put this down largely to a lack of surprise at the Fed's decision. Remember, rate hike certainty was running at greater than 90% this December. Compare that to the previous rate hike, in December 2015, when the markets pegged the odds of that rate hike at just 50%.

So it's simple: When the markets are surprised, they run for gold, thanks to its legendary status as a hedge.

The silver picture is similar. Its slide started in the summer of 2016 after hitting a yearly high of $20.59. Skittish traders sold and sold some more, fearing it would go lower in a kind of self-fulfilling prophecy.

Trump's unexpected victory in the November election didn't do silver and gold any favors. The U.S. Dollar Index's (DXY) meteoric rise since November has created some short-term resistance for the white metal, since, like gold, it directly competes with the dollar. 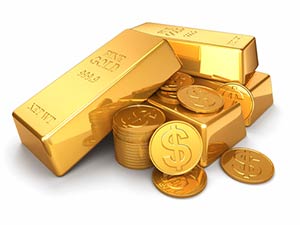 But like I said, the odds are very strong that we've seen the bottom of this metal correction.

Indeed, we've already seen a steep pullback in "smart money" shorts, in other words, gold and silver producers who bet on futures to protect their downside. Since July, gold producers alone have pruned their short positions from 340,000 back to 155,000, as of Dec. 5. That drop of 54% in just six months indicates bearish metals sentiment is running on fumes.

And now the stage is set for both gold and silver to move considerably higher in the new year.

Gold & Silver Catalyst No. 1: The "Surprise" Metal Demand No One Predicted

There's an interesting element to the demand picture, one that's not being talked about. It is, of course, India.

The world's largest democracy is a huge consumer of precious metals for all sorts of cultural and economic reasons. And it turns out that India had a surprise of its own on Nov. 8.

Good article.
Where do I buy Gold bars?. How do I do this? I do not want stock or certificates.

Thanks for reading Money Morning. We have a specific guide on how to buy gold and silver you can access here.

I like you. I think you've contributed some good columns over the years … AND … the idea you've put forth here that it's producer hedging that accounted for the recent record level of gold and silver shorts on the Comex is ridiculous.

It's the bullion bankers rigging the market.

This isn't banks acting as agents for the miners. This isn't even pure speculation we're seeing.. It's a program of suppression. You have to know that, and I get that Money Morning doesn't feel as if you can come out and say that without making yourselves look like some kind of conspiracy kooks, but this is no longer conspiracy theory. It's documented conspiracy fact.

Deutsche Bank has already fessed up and paid a fine and implicated a lot of larger players in the silver rigging in London … and those shenanigans are child's play compared to what the big boyz are getting away with at the Comex.

What? Will you guys act surprised when the full extent of the criminality is revealed one day?

When they crash the world currencies later this year , prices will go a lot higher than you can imagine.
What you don't understand is the second coming.
At some point they will be throwing there gold in the streets.
Peace

The reasons that gold and silver prices will go up do exist already for a couple of years and you are completely right, however, what you and many of your colleagues overlook and I don't understand Why, is that the markets are in the hands of criminals who are manipulating with a.o. HFT trading and other criminal activities. We all know who they are but nobody is taking actions so we continue to see the same pattern year in year out.

what does it mean that they will through their gold in the streets?