(Kitco News) – World stock markets were mostly weaker and tried to stabilize Tuesday after the sharp sell-off in U.S. and European equities on Monday. Asian stock markets followed on Tuesday by trading lower. Markets in China are still closed for the Lunar New Year holiday. U.S. stock indexes are pointed toward weaker openings when the New York day session begins.

The world marketplace is still uneasy regarding executive moves the new U.S. president has made. President Donald Trump on Monday fired the acting U.S. attorney general when she refused to support his immigration ban. This seemingly growing uncertainty, including related world stock market weakness, is a mildly bullish element for the safe-haven gold market.

In overnight news, Euro zone gross domestic product in the fourth quarter was up 0.5% from the third quarter and was up 1.8%, year-on-year. Those numbers were just above market expectations. The Euro zone January consumer price index was up 1.8% versus up 1.1% in December.

The Bank of Japan left its monetary policy unchanged at its regular meeting Tuesday, as expected. The BOJ officials, when asked by reporters, did say they were concerned about protectionist moves by the U.S., under its new president. 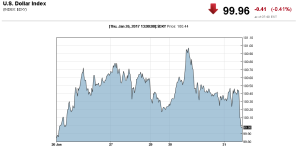 The other key "outside market" on Tuesday sees Nymex crude oil prices trading slightly lower. The latest U.S. rig count shows U.S. shale oil production is on the rise, which is limiting the upside in crude oil.

The Federal Reserve's FOMC meeting begins Tuesday morning and ends Wednesday afternoon with a statement. No change in U.S. interest rates or monetary policy is expected. However, the wording of the statement will be closely scrutinized for clues regarding the future path of monetary policy. 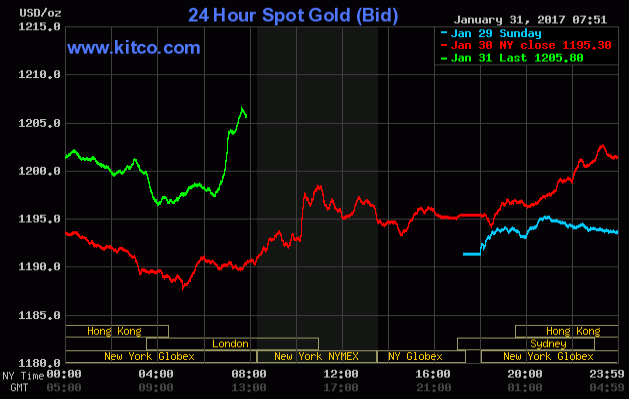