Gold prices are moderately higher Tuesday. Some safe-haven demand has surfaced again following the resignation of President Trump's national security advisor, Mike Flynn, who made contradictory statements about his contacts with Russia.

Focus Tuesday is on testimony from Fed Chair Janet Yellen before the U.S. Senate, in the semi-annual Humphrey-Hawkins reports. She will discuss the U.S. economy and monetary policy. The meeting begins at 10:00 a.m. eastern time. Traders and investors will glean her remarks for clues on the timing of the next U.S. interest rate increase, which could come as early as March.

Most Fed watchers think the next rate hike from the Fed will come in June.

Yellen will also likely be grilled on what she thinks about the Trump administration's economic and fiscal policies.

In overnight news, the Euro zone gross domestic product in the fourth quarter of last year was up 0.4% from the third quarter and up 1.7%, year-on-year. Those numbers were just a bit weaker than expected.

China's consumer price index in January was up 2.5%, year-on-year and up 1.0% from December. Those figures were close to being in line with market expectations.

The key "outside markets" on Tuesday morning find the U.S. dollar index trading lower. The greenback bulls still have some upside momentum as prices have been trending higher for two weeks. Meantime, Nymex crude oil prices are higher. Oil prices are back in a sideways trading range that has bound that market for weeks. 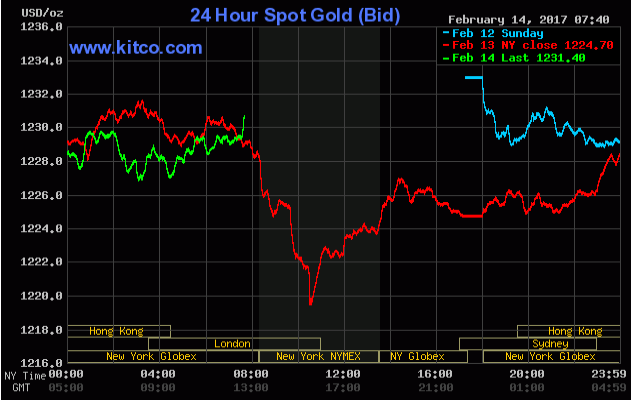