The U.S. stock indexes are on a record-setting run that has the bulls very comfortable at present. However, the indexes are now way overbought, technically, and due for sizable downside corrections at any moment.

Gold prices are trading near steady in early U.S. trading. Bullish technicals are being offset by the strong U.S. dollar index this week. 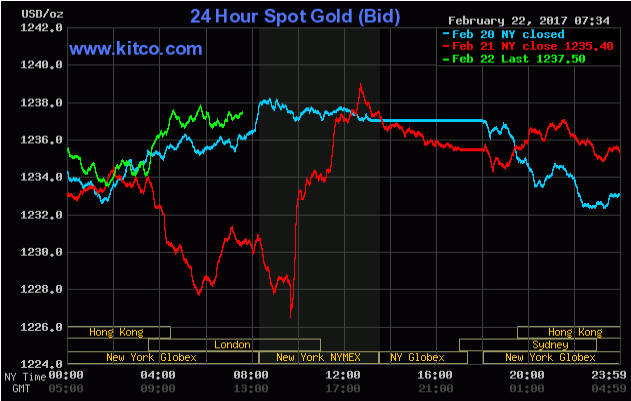 Arguably the most important economic event for the world marketplace this week will be this afternoon's release of the minutes from the last meeting of the Federal Reserve's Open Market Committee (FOMC). Traders and investors will parse the FOMC statement for clues on the timing of the next interest rate increase from the Fed. Many now think a U.S. rate hike in March could come from the FOMC.

In overnight news, the Euro zone's consumer price index was up 1.8% in January, year-on-year, following a 1.1% rise in December. The January rate is close to the 2.0% annual inflation rate the European Central Bank wants to see. Indeed, the major economies of the world are starting to see rising inflation-although not yet considered problematic.

The key "outside markets" on Wednesday morning find the U.S. dollar index trading higher again. The greenback bulls have momentum and the overall near-term technical advantage amid a fledgling price uptrend on the daily chart. Meantime, Nymex crude oil futures prices are slightly lower today on a corrective pullback after hitting a six-week high on Tuesday. Oil prices are in a sideways trading range that has bound the market for weeks.