Yesterday (Monday, Feb. 27), SpaceX announced plans to send two private citizens around the moon and back before the end of 2018. This exciting news has investors anxious to buy SpaceX stock before the mission happens next year.

Unfortunately, it doesn't look like the SpaceX IPO will happen before 2022 – the year CEO Elon Musk plans to start colonizing Mars.

In a 2015 interview, Musk said not taking SpaceX public is the only way to accomplish the long-term goal of sending people to Mars. When asked about the SpaceX IPO date, he said it will only happen "once flights to Mars begin."

First, here's why people are so thrilled over yesterday's SpaceX news… 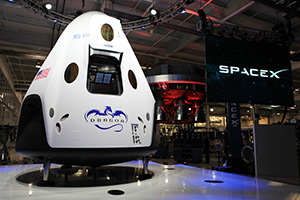 SpaceX announced yesterday that it will send two tourists on a privately crewed Dragon 2 spacecraft on a moon mission by the end of 2018. The passengers will spend roughly one week inside the Dragon 2 capsules, which will be launched on the brand-new Falcon Heavy rocket.

The plan is for the two citizens to fly around the moon and back to Earth, making them the first humans to travel that far into space in over four decades. According to the official announcement on the SpaceX website, they will undergo health tests and fitness training later in 2017.

It's clear that February has been a huge month for SpaceX. In fact, yesterday's news comes just three weeks after the company announced plans to significantly ramp up its Falcon 9 supply launches…

On Feb. 6, SpaceX Chief Operating Officer and President Gwynne Shotwell said the firm will start launching Falcon 9 rockets once every two to three weeks from Kennedy Space Center. Since the company has only launched a maximum of nine a year since 2015, this will be the fastest rate of Falcon 9 launches ever.

And this new initiative kicked off on Sunday, Feb. 19. That was when SpaceX successfully launched its first Falcon 9 from Kennedy Space Center and landed it on the International Space Station (ISS).

While this exciting SpaceX news has caught the attention of investors, there's another aspect of the company that's been of big interest to investors for years now. It shows how SpaceX stacks up against other massive private companies.

And it's perfectly summed up in this one chart…