(Kitco News) – World stock markets were mostly weaker in subdued trading Tuesday. U.S. stock indexes are pointed toward slightly weaker openings when the New York day session begins. A blizzard on the U.S. eastern seaboard could make for quieter trading in U.S. stock and financial markets Tuesday. President Trump has cancelled a meeting with German Chancellor Merkel due to the inclement weather.

Gold prices are trading near steady Tuesday morning. The bears still have the overall near-term technical advantage in the precious metal, as prices are trending lower on the daily chart.

World bond markets are under pressure again this week (rising yields), as the specter of rising world inflationary pressures continues to gain relevance in the marketplace. 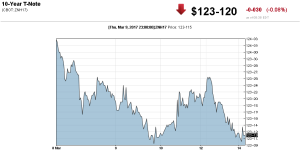 Focus of the world marketplace early this week is the two-day meeting of the Federal Reserve's Open Market Committee (FOMC) that begins Tuesday morning and ends Wednesday afternoon with a statement and a press conference from Fed Chair Janet Yellen. It's widely expected the FOMC will raise U.S. interest rates by 0.25% at this week's meeting. However, markets have already factored in the likely rate hike announcement Wednesday afternoon, so keener focus will be on the Fed statement and Yellen's comments at her press conference regarding the pace of U.S. interest rate increases in the coming months.

In overnight news, the Euro zone industrial output report came in at up 0.9% in January from December and up 0.6%, year-on-year. Those figures were shy of market expectations.

The key outside markets on Tuesday morning see the U.S. dollar index trading higher. The dollar index is in a price uptrend and has benefitted recently on the likelihood of a U.S. interest rate hike coming on Wednesday. Nymex crude oil prices are firmer today on a corrective bounce after hitting a 3.5-month low on Monday. The oil market has been in a tailspin, which has somewhat dented worldwide investor and trader risk appetite, and has been a significantly bearish element for much of the raw commodity sector, including the precious metals markets. 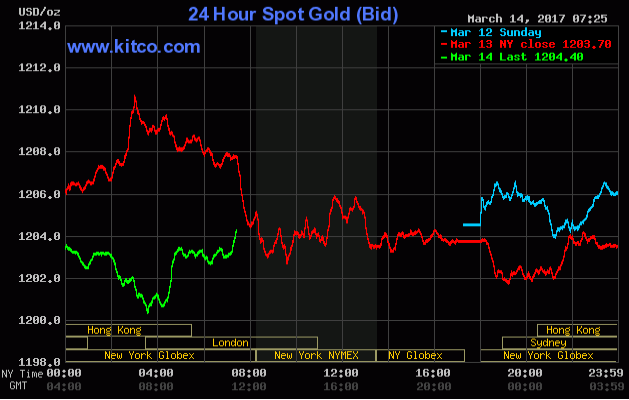