Trying to guess the outcome of pre-scheduled market news like FOMC interest rate announcements, monthly employment reports, and – importantly for us this weekend – election results is always a 50/50 coin flip.

If anyone had a system down for accurately predicting these events, Goldman Sachs would gladly pay you seven figures to share your prognostications with them.

As I see it, there are three ways this election could pan out, and it has everything to do with the European Union-friendliness of the winning candidates.

Each scenario will have its own unique reaction in the market. And it's possible to play this election the same way we did the Brexit vote and the U.S. election last fall, for massive triple-digit profits.

A Seriously Diverse Field of Candidates… and Possibilities

As we can see on the chart below, there are four candidates we need to focus our attention on: Jean-Luc Mélenchon, Emmanuel Macron, François Fillon, and Marine Le Pen. 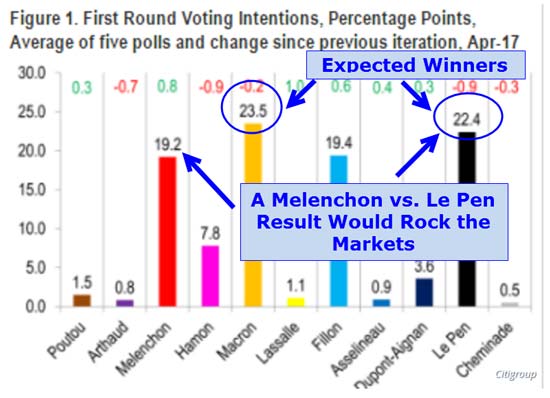 Looking at the chart, we can see that these four front-runners are in a virtual tie as we head into the last stretch of the campaign.

Now, interestingly enough, the far-left candidate, Mélenchon, and far-right contender, Le Pen, are the two candidates with an anti-EU stance, reflecting their respective ultra-liberal and arch-conservative versions of populism.

It's the two more centrist candidates, Filion and Macron, who are pro-EU.

Any of the top four could win, but I'm predicting that one of three scenarios will play out…

The best case for the market is for Le Pen and Macron to move on through the first round of voting this weekend.

With early polls projecting wins for the pair, the market has already priced that scenario into the proceedings.

But there is one caveat… which leads us to our second possible outcome.

Election Scenario No. 2: A Turnout Shocker

If Le Pen and Macron do move on to the next round, there is one thing that could strike fear in the heart of investors worldwide – her voter turnout is significantly stronger than her polls suggest.

If that happens, we could easily see the stock market drop.

Though, not as significant of a drop as our third scenario.

If Marine Le Pen and Jean-Luc Mélenchon move on, it will be a dark day for the European stock indexes.

The advance of these two candidates would ensure a negative European Union stance from France, a hugely influential European power, going forward.

If that happens, we can easily expect to see double-digit drops in EU stock indexes.

Of course folks who are short European stocks would clean up in this case… and get killed if it happens any other way.

Now, as investors, there is a simple strategy we can use to profit – no matter which one of these scenarios plays out.

Instead of trading the news and trying to predict the outcome – we trade the reaction to the news.

The reason for avoiding the prediction game is simple: If you're right, you could hit a nice payday… But if you're wrong, you could lose your shirt.

This is especially true for news events that happen when the markets aren't open, like this weekend's French election.

If your directional guess was wrong, the market could make really big moves against you before you have a chance to get out.

So with these type of "guess before it happens" trades, you have to weigh a big upside versus an even bigger potential downside.

This is what we call an asymmetric risk, and it is one I'm not willing to take without some serious analysis that gives me an edge.

And in the case of the French elections, the exceptionally poor track record of political pollsters of late makes every cell in my body scream, "Steer clear!"

And so, in my Stealth Profits Trader service, we'll trade the reaction instead – just like we did after the Brexit vote.

And just like we did after the U.S. election last fall – which resulted in half a dozen triple-digit wins.

There is no need to be greedy and try and handicap this event.
Fact is, all three of these scenarios have some probability of occurring. So I'm recommending my Stealth Profits Trader readers stay out of the "rain" and keep their powder dry 'till Monday morning. Folks following along in Money Morning would be well-advised to do the same, and get short or long depending on the result.

No matter what happens, the reaction will be big enough for everyone to have a chance to play it.

Whatever happens in France, you can bet the markets will have an extreme reaction. The thing is, those extremes are where it's possible to make huge, fast profits. Finding and exploiting those extremes for maximum gains is what D.R. is teaching his 10-Minute Millionaire readers how to do twice each week, free of charge. Click here to get his new, free service.

Looking forward to your service

need to wait for email with description of today's activities