(Kitco News) – World stock markets were mostly lower again overnight, amid the heightened trader and investor anxiety in the marketplace. The U.S.-North Korea tensions have not receded and escalated a bit Thursday as U.S. President Trump again warned North Korea that any military action by that regime against a U.S. friend would prompt a massive response from the U.S.

He also said Thursday his previous "fire and fury" statement maybe was not tough enough. Some are calling this matter the next Cuban missile crisis. U.S. stock indexes are also pointed toward weaker openings when the New York day session begins.

Gold prices are modestly higher and hit a two-month high overnight, on continued safe-haven demand that has occurred this week. Noted investor Ray Dalio is reportedly advising investors to have 5% to 10% of their investment portfolio in gold. 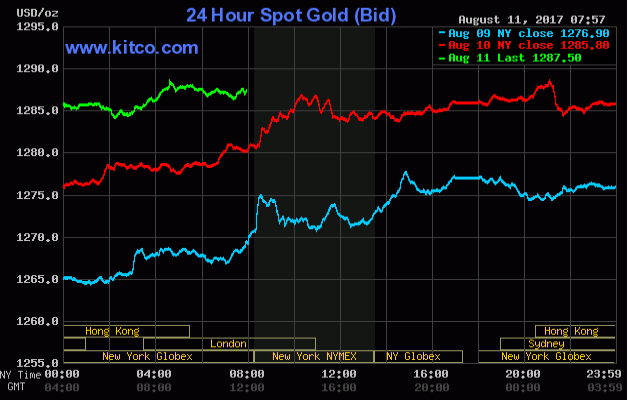 The U.S. dollar index is modestly higher in early U.S. trading Friday, on some mild safe-haven demand for the greenback. However, the dollar index has not yet been significantly impacted by the U.S.-North Korea face-off.

Nymex crude oil futures are modestly lower in early U.S. trading. The International Energy Agency has revised down its world oil demand estimate. The IEA also estimated that OPEC members' compliance to their production quotas is only about 75%.

The key U.S. data point on Friday is the July consumer price index. CPI is forecast to come in at up 0.2%. The June reading was at 0.0%. Inflation data from around the world has been on the weak side recently. Such is going to make it harder for the world's central banks to raise their interest rates.