Gold prices are near steady in pre-U.S.-day-session trading. Gold bulls still have the near-term chart advantage amid an uptrend in place on the daily bar chart.

Many markets have been quieter most of this week, ahead of the highly anticipated annual world central bankers meeting in Jackson Hole, Wyoming, that began Thursday and ends Saturday. Featured speakers at the three-day event include Federal Reserve Chair Janet Yellen, who is scheduled to speak this morning at 10:00 a.m. EDT. European Central Bank President Mario Draghi is slated to speak this afternoon at 3:00 p.m. EDT.

Traders and investors will closely examine these Jackson Hole speeches and other central bankers' remarks for any clues on future monetary policy moves by the world's major central banks. There are ideas the central bankers will mention generally very low inflation worldwide, which could be extrapolated to mean keeping very accommodative monetary policies in place longer.

Draghi's remarks are likely to impact the Euro currency, especially after the ECB has recently expressed a bit of concern about the appreciation of the Euro. In recent years the Jackson Hole central bankers confab has significantly moved the markets. 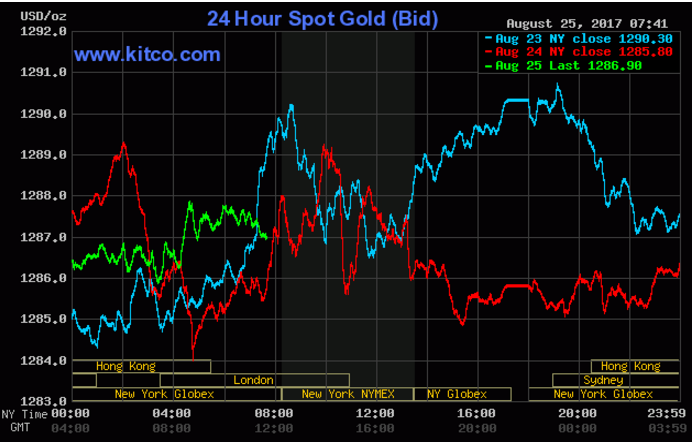 In overnight news, the closely watched German Ifo business climate index rose to 115.9 in August from 115.5 in July.

The key "outside markets" early Friday see the U.S. dollar index slightly lower. The greenback has been trading choppy and sideways at lower levels during the month of August. Nymex crude oil futures are firmer as a hurricane is bearing down on Texas and a major gasoline refinery. Oil was pressured by that news on Thursday because of ideas a shutdown of the refinery would reduce demand for U.S. crude.