Although SpaceX is not a publicly traded company yet, a SpaceX IPO filing could happen as soon as 2018.

But you can still profit from the excitement around the SpaceX IPO now, months before the company goes public.

Today, Money Morning Director of Technology & Venture Capital Research Michael A. Robinson will show you one of the best ways to make money from the frenzy around new IPOs. Unlike SpaceX, you can make this investment right now...

Musk hasn't filed for a SpaceX IPO yet because he wants to first focus on getting people to Mars. 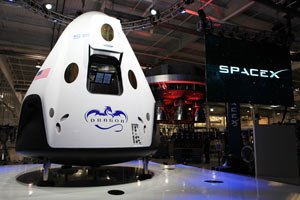 Since its founding in 2002, SpaceX's long-term goal has been to colonize Mars. Musk wants to use his rockets - notably the Crew Dragon, one of the only models right now able to transport people - to send humans to live on Mars.

Musk - who's also the Tesla Inc. (Nasdaq: TSLA) CEO - said at a 2015 shareholder conference that he won't take SpaceX public until this process begins. When asked for a timeline of the SpaceX IPO, he simply answered, "once flights to Mars begin."

According to Musk's detailed timeline presented to the International Astronautical Congress last year, a Crew Dragon with U.S. astronauts could launch in May 2018.

This is a very optimistic timeline since this phase was already pushed back twice. The original November 2017 launch window was pushed to March 2018, before being pushed again to May 2018.

If this launch isn't delayed again and Musk sticks to his statement from the Tesla conference, SpaceX could file for an IPO eight months from now at the earliest.

But you don't have to wait that long to profit from the excitement SpaceX is creating. With Michael's recommendation, you can start profiting today.

Michael likes this investment because it exposes you to both new IPOs and companies that have been public for years. This balance hedges against the early volatility typical of new IPOs. During a stock's first three months of trading, its share price can be volatile, since investors are still determining how to value it after the IPO buying frenzy.

Michael's investment pick tracks IPOs during their first 1,000 trading days. While this exposes you to some IPO volatility, it hardly affects the investment's overall performance. Almost every IPO makes up less than 1% of the investment's total holdings.

So, you'll be benefiting from well-established stocks as well as the exciting, new stocks that have just hit the market.