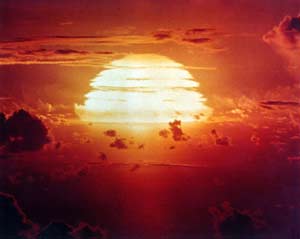 And while we could speculate as to the reason for the Hermit Regime's silence - UN sanctions, perhaps, or China's recently added pressure - we'd rather hone in on audible rustlings from East Asian countries nearby.

North Korea's neighbor countries are actively abustle right now with internal debates on whether they should build up their own nuclear weapons programs to counter Kim Jong Un's various threats.

South Korea and Japan are the loudest among those talking; they've arguably got more at stake than other East Asia nations - they're closer to Pyongyang, with tens of millions of lives to protect.

But other Pacific nations are talking about their own nuclear programs, too.

Here's who's lacing up for Asia's nuclear arms race - and what the threat of nuclear proliferation means for investors in the United States.

North Korea Worries Its Nearest Neighbors the Most

For Japan and South Korea, there is a clear obstacle in the way of their obtaining atomic weapons: The Nuclear Nonproliferation Treaty of 1968, which bars both countries from manufacturing and possessing nuclear bombs.

But that doesn't mean they couldn't do it anyway; they already have the means.

According to The New York Times on Oct. 28, both Tokyo and Seoul have the technological proficiency to produce thousands of missiles already.

And they could do so quickly.

In fact, South Korea has 24 nuclear reactors that have produced enough spent fuel for Seoul to manufacture more than 4,300 bombs, according to a 2015 paper by Charles D. Ferguson, president of the Federation of American Scientists.

For its part, Japan has 10 tons of plutonium stored domestically and another 37 tons overseas, according NYT on Saturday.

So, both countries are ostensibly capable of building their own nuclear weapons. But here's where the rubber meets the road...

For the first time, both countries want to.

Why South Korea and Japan Now Lean Toward Nuclear Armament

The idea of a nuclear-armed South Korea has gained steam in the country - chiefly because of North Korea's Sept. 3 nuclear test - its most powerful to date - but also because the watered-down UN sanctions passed on Sept. 11 didn't fulfill the measures requested by Seoul, Washington, and Tokyo.

The trio had asked that day for "a full crude-oil embargo, which would have crippled the North Korean economy," The Washington Post reported on Sept. 13, "but the UN resolution instead imposed a cap on oil imports to Pyongyang."

And on Sept. 7, Gallup Korea reported that 60% of South Koreans "theoretically" support nuclear weapons for their country, according to Reuters. That majority percentage indicated a definitive shift in opinion for the North's closest neighbor; South Korea's population has historically opposed the manufacture of nukes, reported CNBC on Aug. 24.

Japan has also remained historically steadfast in its "antinuclear weapons sentiment" over the years. For five decades, the nation has upheld three non-nuclear principles that prohibit the possession, manufacture, and housing of nuclear weapons on its territory.

But even that paradigm is shifting...

On Sept. 6, a senior defense policymaker from Tokyo told Reuters on the condition of anonymity that "perhaps it's time for our three principles to become two" - suggesting that nuclear weapons be permitted into Japan.

Allowing nuclear weapons ashore now would not pose the same great political risk to Japanese President Shinzo Abe that it did even a week ago. That's because Abe called a snap election that took place on Oct. 22 in order to secure a two-thirds "super majority" in Parliament, which will help him achieve his goal of amending the constitution.

It was Abe's government, after all, that insisted in April 2016 the Japanese constitution does not explicitly prohibit nuclear weapons. Abe's policy has since evolved into an outright plan to overturn Japan's post-war antinuke constitution altogether.

There are other North Korean neighbor countries beside Japan and South Korea hoping to atomically arm themselves, as well...

Taiwan and Australia Want Nukes, Too

Taiwan has been harboring the idea of nuclear proliferation for some time now, in the face of tensions between itself and China.

Taiwan, like South Korea and Japan, has nuclear power capabilities, including six operating reactors - two under construction and one for research, according to a report from The University of Melbourne on Oct. 9. It used to have a nuclear weapons program, too - on the sly - until 1988, when it was caught building bombs.

And just this year, Taiwanese support for a nuke program has resurfaced.

For example, an unnamed Taiwanese current affairs commentator close to the nation's ruling Democratic Progressive Party recently stated on live TV that "the country was capable of making a nuclear bomb in 'as little as in seven days' and [China] should thus rethink its menacing of the island," reported Asia Times on Oct. 17.

What's more, Taiwan is in a distinct position in the Pacific Ocean to intervene with North Korea's illicit trade.

"Taiwan is well-positioned to play a more active role in disrupting such trade that falls under UN Security Council sanctions and seize those cargoes," Russell Hsiao, executive director of the Global Taiwan Institute, told USNI News on Aug. 14.

Of course, doing so could draw the ire and attention of the Hermit Dynasty, which the world already knows has missiles capable of reaching Taipei.

Drones Are Going to Be Big - $127-Billion-In-New-Wealth-For-Early-Investors Big. See The 7 Reasons This Drone Company's Stock Is Set to Explode.

It would also make sense for Taiwan to want to arm itself as other nations in the Pacific theater looks to do so.

Henry A. Kissinger, one of the few nuclear strategists from the early days of the Cold War, said as much to NYT this past weekend...

"If [South Korea and Japan] continue to have nuclear weapons, nuclear weapons must spread in the rest of Asia," he said. "It cannot be that North Korea is the only Korean country in the world that has nuclear weapons, without the South Koreans trying to match it. Nor can it be that Japan will sit there," he added. "So therefore we're talking about nuclear proliferation."

Australia is also looking to up its nuclear capabilities in the face of North Korean threats.

Australia has consistently refused to support or sign a nascent nuclear weapons-banning treaty - supported by 122 countries - on the basis that it relies on the United States' nuclear umbrella protection and therefore adheres to the nuclear nonproliferation treaty instead.

Recently, however, Stephan Fruehling, a defense scholar from the Australian National University, argued for Australia's actual break from the treaty so that it could upgrade its own program in the meantime. Fruehling pointed out that the U.S. nuclear umbrella has primarily served to stop American allies from seeking their own weapons programs. As a result, the treaty benefits America alone.

"As China in particular but also Russia in Europe starts to gain at least regional conventional superiority, I think the West and the U.S. will look more to nuclear weapons to counterbalance that," he said, according to the Sydney Morning Herald on Oct. 28.

"[That's] essentially what we did in the Cold War," Fruehling added.

These varied pushes for nuclear armament in the Pacific indicate that uncertainty and fear are at an all-time high, and a lot of America's allies no longer feel comfortable under its "nuclear umbrella."

And they aren't wrong to feel that way. After all, the evidence suggests that America's nuclear arsenal is a lot more bark than bite nowadays.

"We've fallen behind in nukes, cyberwarfare, and space as a 'high ground' spot in the battlefields of the future," he wrote on July 31.

The advancements made by that trio, coupled with the Pentagon's long history of denying the fact that they're even threats in the first place, led Bill to warn, "we've got a lot of catching up to do."

Fortunately, that catching up is beginning to happen...

And the company responsible is poised to make investors rich.

Bill notes that "the UAV (unmanned aerial vehicle) market is growing fast - and is destined to reach 'huge' status" - particularly as East Asian nations look to build up their own weapons programs at breakneck speed.

UAVs can swoop in to assess what's happening on enemy territory without detection and without risking human lives to boot.

Bill points to a particular Aurora-Boeing test in May as proof that Boeing's acquisition of Aurora will indeed drive the U.S. military's weapons arsenal upgrade.

That's when the two defense tech companies successfully piloted an automated system on a Boeing jet.

DARPA had sponsored this project, which means that the defense agency has definite military intentions for its further use.

In fact, Bill's original prescient "call" to buy the world's jetliner pioneer was based on the fact that he knew its innovative prowess would continue to pique DARPA's interests for decades to come.

And sure enough, Boeing was awarded a contract to upgrade the military's Minutemen II missiles in August.

That project will last until 2030, at least.

And now, Boeing is the looking to be named the military's top drone developer to boot.

When Bill first recommended BA, shares were trading at just $61.92 each and were paying a dividend of $1.68 a share.

In short, folks who acted on Bill's "buy" recommendation are sitting on a 232% profit and have reaped a total return (with dividends) of about 260%.

Boeing will play a leading role in the drone market's $6.1 trillion future, which will doubtless be profitable for investors.

But now, Bill is showing readers another opportunity in the drone industry that has profit potential beyond anything Bill has seen before...

Where do feel RADA falls in your analysis.
Although an a Israeli company it is on the cutting edge in drone technology.
I enjoy yours and Bills articles on Mil/ Aerospace, they are both extremely factual as well as forward thinking.
Warmest regards
Thomas Baydala
President
Bay Engineering