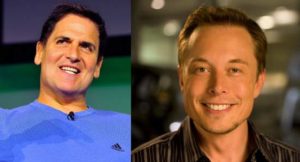 Catlin Powers, a 27-year-old entrepreneur, introduced her a solar-powered grill on "Shark Tank" as a revolutionary product that runs on solar batteries. "It stores energy in organic molecules over multiple days at a time, a lot like plants do," she said, according to Yahoo Finance this morning. "It's a natural biomimicry system, and that system will allow us to cook at night and also cook indoors."

But it wasn't convenient food preparation that piqued Cuban's interest.

It was Powers' solar-powered battery, in which Cuban saw an energy empire.

"Do you think that you can put the fear of God in Elon Musk and put them out of business?" Cuban asked Powers.

Powers replied, "Yes, I think we have the potential to do that."

Her "I think" is a mighty big hedge, if you ask us. Although Cuban dropped $500,000 on the spot for a 4% stake in the company, we at Money Morning are less convinced that this startup will make a dent in Tesla.

But Cuban's right about one thing...

The Future of Tesla Is Tech, Not Cars

It would be fruitless for Cuban to try to contend with Tesla's solar storage business, let alone "put them out of business."

That's because Elon Musk's head start in the sector has every other solar battery company out there terminally outdistanced. There's no catching up.

In fact, Money Morning Chief Investment Strategist Keith Fitz-Gerald has long been bullish on Tesla because of its innovative technology, not its cars.

Just look to Tesla's 5.5 million-square-foot battery plant, called the Gigafactory, for proof that Musk understands how key battery power innovations are for his firm's future.

And the best part? Wall Street hasn't caught on yet.

"For millions of investors and most Wall Street analysts, Tesla is just an electric car company. That's a myopic view that will cost them dearly," Keith told his Total Wealth subscribers in September.

"The way I see things, investing in Tesla is not just about the company itself but also about the thousands of companies it will wipe out along the way - and the enormous profit potential created as it happens," Keith added.

"Amazon rose and companies like Sears and other retailers cratered," Keith explained. "The same logic applies."

Indeed, Tesla is leading the way in solar-powered batteries, and it dominates in the U.S. electric vehicle market, too. Tesla is even the country's largest solar installer, after Musk absorbed his cousins' business, SolarCity, in November 2016.

"Tesla is at the vanguard of a titanic shift in how we use energy," Keith said.

Which is why there's no denying Tesla's long-term profit potential.

It's just getting started.

In fact, Musk laid out his energy goals for Tesla on a conference call to the media last Wednesday...

"Energy-storage sales will triple [in 2018]," Marketwatch reported Musk as saying. "Revenue growth rate will exceed 2017, when [overall] sales grew by more than 52%."

We wish Powers the best of luck, but our money's on Musk.

Because it only takes 10 minutes to set yourself up to make more money from the markets than you've ever seen in your life. We've never seen a simpler method for scoring fast, consistent money-doubling opportunities.

A year from now, you could be looking back at this moment as the defining event of your financial future. The first step on your road to millions starts right here.

Well! I arrived. Lol Uncertain of this area though. Anyways! I don't want to bother you anymore but I promised myself i would pop in to look as it was a part of my tour. I know I can just peek but at least i will of seen it for myself. Off to Washington next. To see the Trump House. Then home.

No matter what. It was necessary for me to get out as it seems like a lifetime since I could. Now and after I've visited and seen the Orioles home base and a few other sights. Washington White House. Then I promise I will not annoy you anymore with my messages. I came here to see if I was reading things correctly. I believe I missed a step somewhere. I never thought I'd meet anyone but I needed to know for my own research.
So! Me and my guys are tired. Taking a walk around soon to see what's here. Grab some grub and get a good sleep.

Thank You again for High Velocity. As soon as I can trade options. I'll practice first and then I believe I will get a life back and a very positive attitude from your recommendations and your help.