Picking investments that will deliver a positive return is hard enough without someone undermining those gains every step of the way.

That's exactly what happens with broker fees. The commissions on trades and annual account maintenance fees take a big bite out of your profits every year. 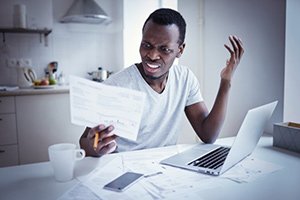 Fees vary widely among brokers, and some are less apparent than others. For instance, brokers sometimes receive marketing and service fees from mutual fund management companies - costs passed along to clients.

The range of fees - most even charge you for closing and moving your account - mean it's easy to get nickeled and dimed to death.

That's not to say that brokers don't provide services that have value. And more experienced investors can reduce the impact by going with discount brokers that offer less advice and hand-holding in exchange for lower fees.

But no investor can avoid broker fees altogether.

And the steady drain on their accounts does serious damage to their long-term profits.

A New Era of Moneymaking: Fed up with this chaotic market? You could collect THOUSANDS of dollars just by pressing a single button on your computer - without touching a single stock (or stock option). Learn more.

Even seemingly small fees can have a dramatic impact on your returns over time.

The U.S. Securities and Exchange Commission (SEC) has published an investor bulletin that illustrates how this works...

How Much Broker Fees Really Cost You

The SEC bulletin discusses a hypothetical scenario in which an investor with a $100,000 portfolio pays 1% in ongoing fees. That doesn't sound like much, right?

But projected over 20 years, that small fee causes major damage. For a portfolio earning a modest gain of 4% a year, that 1% fee alone reduces gains by $28,000. That money would itself have earned an additional return of $12,000 over 20 years. 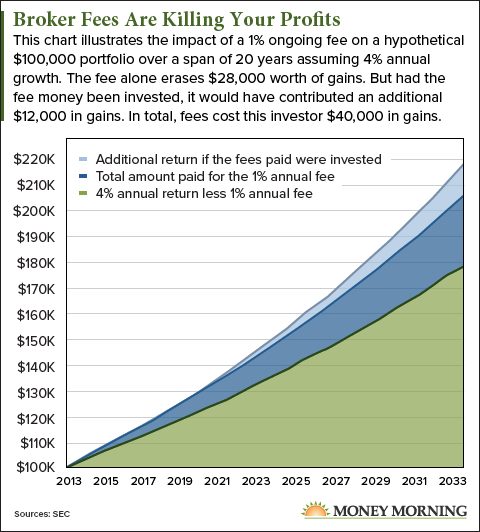 So that 1% fee reduced total gains from $120,000 to $80,000. That's one-third of this hypothetical investor's profits gone into the pockets of his broker.

Of course, each individual situation is different. But it's clear that even "small" broker fees can inflict a lot of pain.

At the same time, this truth about fees explains why brokers earn much more than the average American worker.

Most Americans would be thrilled with a salary in that range.

Now, brokers aren't doing anything wrong. They're simply serving as "middlemen," earning their keep by facilitating trades and dispensing advice.

"Banks, institutional firms... every major player in finance makes their money in the middle... collecting fees," said Money Morning Capital Wave Strategist Shah Gilani. "Everyday investors have been the ones coughing up those fees and taking on all the risk."

But instead of getting upset about this, Gilani said investors should take a page from the brokers' book.

How to Make Money as a "Middleman"

Gilani, a Wall Street veteran who has made millions trading stocks over more than 36 years, has developed a way for individual investors to become a kind of middleman themselves, by executing what he calls "middleman trades."

This strategy has proven so successful, Gilani said he's done with stocks.

In today's chaotic market, this could be the perfect way to make enormous profits, each and every week. You could collect THOUSANDS of dollars from the markets just by pressing a single button on your computer - without touching a single stock (or stock option). For a limited time, we're revealing all the details with Money Morning readers. Find out more here.