Most investing advice is cheap. You've probably been told how to invest by a friend at the bar, an uncle at Thanksgiving dinner, or pretty much anytime you've turned on your TV.

But good investing advice, on the other hand, is priceless.

Every now and then, a legendary investor 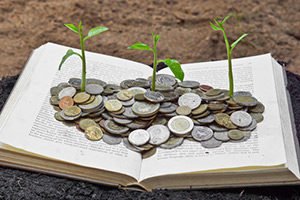 reveals a bit of their investing wisdom to the public and it makes us stop in our tracks.

When the likes of Warren Buffett, Carl Icahn, Tim Melvin, or Ray Dalio reveal the inner workings of their investing strategies, we listen.

Howard Marks, the co-founder of Oaktree Capital, is one of the richest and most successful money managers on the planet. He also just revealed his top investing adage.

And Marks' wisdom couldn't be more topical for the market climate we're looking at now.

Did you catch that?

This insight might sound simple, but it has profound importance for investors everywhere, most especially in today's stock market...

How Going Against the Herd Can Make You Rich

We're currently in the middle of the longest bull market on record, the Dow Jones just hit an all-time high, and the economy is red hot (Moody's predicts unemployment could fall to 3% next year).

That's welcome news for investors - your portfolio should be doing quite well - but it also means stocks with real growth potential are hard to come by.

Yes, the S&P 500 is up about 8% on the year, but 8% isn't the sort of explosive growth that will help you retire rich. Plus, analysts are projecting that investors can expect an anemic 2% to 4% annual growth over the next decade.

And that's exactly why the investing advice Marks shared is so valuable.

Investors pouring money into ETFs and overpriced stocks after a record nine-and-a-half-year bull market run might be making a potentially costly mistake. They are investing after the biggest gains have already happened.

The people who made the real money, the life-changing money, were those who poured their money in during the aftermath of the 2008 crash. These wise investors were buying when the crowd was selling, and they were buying some of the best companies in the world at rock-bottom prices.

Today, investors buying in can expect to pay an exorbitant markup on stocks. The Shiller P/E ratio is up to 33.12, even higher than it was during the 1920s stock market bubble.

Warren Buffett made the exact same case in his last letter to shareholders, too. Berkshire Hathaway Inc. (NYSE: BRK.A) has more than $100 billion in cash and can't find any deals in this high-priced market.

There's simply too much money chasing too few deals, so investors are overpaying just to get in.

That's not a formula for getting rich.

Just think about what will happen if we enter the next bear market soon. That would mean a 20% decline in stock prices, at least. Our last bear market sent stocks tumbling by 50%. Investors who bought in at the tail end of the last bull market had to wait for a recovery of at least 50% before they made even one penny of profit.

But that doesn't have to be you.

In fact, you don't even have to keep your powder dry and leave your money in cash like Buffett is doing. There are plenty of world-class companies trading at rock-bottom prices, just like those stocks wise investors were gobbling up in 2009. Massive, billion-dollar hedge funds can't go bargain hunting like normal investors can. When you have $100 billion on hand, buying up a $10 million company won't move the needle.

But for investors who know where to look, there are still plenty of bargains to be had.