April has been a big month for Verizon's 5G rollout. The company launched its 5G network in both Minneapolis and Chicago. But it also revealed its list of 20 cities that already have or will receive 5G over the course of 2019, including Washington, D.C.; San Diego; Boston; and Houston. 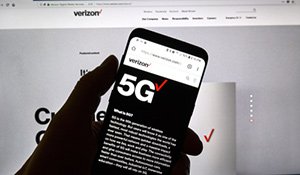 As one of the biggest telecommunications companies in the world, Verizon is creating another catalyst for 5G stocks. It has already established 5G networks in places like Chicago. Now, it's showing that it isn't content with just expanding in hopes that people adopt the technology.

Verizon is going to roll out 5G without charging users any additional fees.

While Verizon originally planned to charge customers $10 per month to use 5G, it decided to delay the fee indefinitely for Samsung Galaxy S10 5G users.

Beyond that, it's also offering incentives to customers who take the plunge into 5G.

According to Business Insider, the company is offering a $200 prepaid MasterCard to anyone who purchases a Galaxy S10 5G alongside its Verizon Unlimited service.

For those that pre-order the new phone, they will receive a free Samsung Wireless Charging Battery Pack and Galaxy Buds. However, they'll also be eligible for $650 off the upgrade.

This is an important move for the 5G industry as a whole. Less than 31% of Verizon's customers are willing to dish out more cash to upgrade to 5G. And for those that are, a PWC survey says they'd only be willing to pay an extra $4.40 a month.

So, while Verizon typically has the most expensive unlimited plans, the decision to wave the $10 fee means big things for 5G tech stocks - incentivizing more people to take the leap into 5G. And more people adopting 5G means manufacturers, suppliers, distributors, and so on will see the trickled-down effects of Verizon's marketing decision.

Every 5G stock stands to see a boost from major companies like Verizon pushing as many consumers as possible into 5G.

In fact, we have one investment opportunity that will see a massive boost as companies big and small inch closer to the 5G revolution.

This investment has the potential to create untold wealth for investors. And this wealth could be greater than when the first computer was made or the dawn of the Internet.

If you missed out then, this is your opportunity to see triple-digit profits.

Here's why 5G could be the biggest technological advancement in over two decades...

I see 5G as one of the major events in our investing lifetime.
I choose to be a part of it!