After a bleak May, stocks are finally rallying again. But with the bull market creaking well past its 10th year - the longest bull market ever - investors are reluctant to put more money in the market. And that's exactly why this is the best time to invest...

Since the start of June, the Dow Jones has climbed nearly 7%, while the S&P 500 hit an all-time high earlier this week. 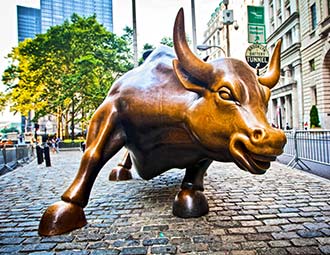 Things couldn't be better for investors. However, you wouldn't know it from looking at Wall Street's largest investment firms.

According to a report from Bank of America Corp. (NYSE: BAC), more investors are keeping their cash on the sidelines. Cash holdings have hit their highest level since 2011.

It's little surprise when you look at the headlines. Trade war fears, uncertainty over the nation's monetary policy, and fears of a recession are just a few of the boogie men keeping the biggest names on Wall Street up at night.

But that's actually a sign it's time to buy.

You see, Wall Street's cold feet over the market isn't a sign the worst is yet to come - it's a clear indicator that now is the perfect time jump headfirst into the market.

Today, we're taking a close look at why the market is far from hitting a plateau - and why Wall Street's sideline strategy is actually a huge catalyst...

According to Bank of America's report, a survey of 230 investors with over $645 billion in assets under management said they have 5.6% of their holdings in cash - the highest level since the debt ceiling crisis in 2011.

That's a significant 1% jump over the same survey results collected last month. It's a clear sign that the biggest names on Wall Street are nervous and are fleeing to safer assets.

Don't Sit This One Out! If you had invested in Apple after the 4G rollout, you could have made 56,465%. Now, 5G is going to create a new generation of millionaires, and you could be one of them. Click here now.

And that's not all. Surveyed investors had the second biggest drop in expectations for earnings next quarter since Bank of America began collecting monthly data.

In fact, the report said it was the "most bearish survey of investor confidence since the global financial crisis."

It's easy to see why the fat cats are so nervous.

First and foremost, international markets have strained under the uncertainty caused by an increasingly aggressive trade war between the United States and China.

Since hitting a yearly low in April, the VIX has jumped over 35% as investors have grown increasingly uncertain over the future of international trade.

Meanwhile, Chinese growth expectations have fallen to their weakest level since December 2008 - 71% of investors believe China's economy will slow over the next 12 months.

In addition, there are emerging fears that a recession could be right around the corner.

The bears on Wall Street are pointing to the inversion of the yield curve as a hostile omen that could mean devastating losses for portfolios both large and small.

And the threat of a possible recession is forcing the nation's monetary policy to do cartwheels.

Recently, the U.S. Federal Reserve indicated it intends to back away from raising interest rates, a stark change in tone from strong raises the reserve argued for last year.

In fact, investors believe that the Fed could resume cutting rates as early as next month.

With the potential of falling returns on the table, the Fed could take swift action to prop up the nation's largest corporations - a clear signal they think a recession is on the horizon.

Taken in conjunction with trade war fears and trouble in the bond market, it's no wonder investors think it's time to keep money on the sidelines.

However, they're getting ahead of themselves.

In fact, none of this means the market is heading for a catastrophic meltdown.

In fact, there's a clear signal that investors' decision to keep cash on the sidelines is setting this one investing strategy up for real profits...

Make This Contrarian Play and Buy While No One Is Looking