The mainstream business news is laser-focused on the trade dispute with China. U.S. President Donald Trump's fight with China's Xi Jinping is just about all you hear or read about in the business news.

Even the string of all-time market highs these past two weeks had a tough time getting any press. The pundits quickly got back to talking about tariffs and trade negotiations, as if nothing else mattered.

But there's a much more important story developing right under our eyes, right in America's heartland. One that no one is talking about, probably because it's not very convenient.

Of course, the truth rarely is.

The Numbers Speak for Themselves

Midwestern farmers are a hardy lot. They're used to surviving everything from long hours and bad weather to periods of lower prices for their products.

But what some of President Trump's strongest supporters are facing today is beyond anything in recent memory. This year alone has seen unseasonable freezing, drought, and now record-breaking flooding hit the Midwest.

Once You See This, You Can't Unsee It: Everyday Americans are repeatedly making 100%, 200%, 500%, or more in a matter of days – sometimes in as little as hours – by spotting insiders trading in real time. To see how they do it, click here now.

On its own, this may have been manageable, but it's the little-discussed consequences of the trade war on small American farmers that has sent U.S. agriculture into crisis mode.

Fourty-four percent of Iowa farmers are struggling to pay their bills.

Last year in Wisconsin, every day saw – on average – two dairy farms close. And the economics are even worse today. In fact, farm incomes and credit ratings have been falling across the Midwest.

Across America, farm bankruptcies have shot up 24%, to the highest rate since 2011, and total farm debt is just below its 1980 record high. That high happened just before the 1980s farm crisis wiped out thousands of farmers.

And delinquencies are definitely rising for agricultural loans:

All in all, total farm income is almost one-third below its 2013 high.

But the real kicker is this: Almost 40% of that income is some form of aid, subsidy, or insurance payment. It's an outrage that no one is talking about this.

But in order to find a way out of this mess, we first have to take an honest look at how we got here…

Why Farmers Are Dealing with Razor-Thin Profit Margins

The price of agricultural commodities has been trending down for years, as farmers here in America and worldwide have been using better tools and techniques to grow food.

Most agricultural products had their prices peak in 2011-2012.

That's a good thing for consumers, but it means that farmers are on razor-thin profit margins with little to no cushion when something bad happens.

And unfortunately, the trade dispute with China has hit American farmers the hardest. America has long been a net exporter of farm goods, not an importer.

1 Hour a Day… 4 Days a Week… 50x: This could be the secret to exponentially (and rapidly) growing your net worth. Find out how…

For example, in the first half of this year, China imported $5.6 billion worth of farm products from America. Meanwhile, America bought only $3.1 billion worth of Chinese farm goods in the same time period. And that's a huge drop in U.S. exports from prior years: 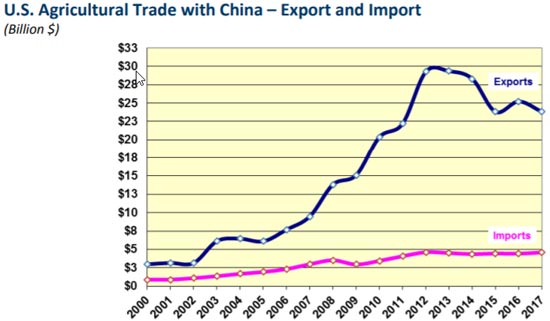 So you can see the effect of the tariffs. China responded to Trump's tariff flurry by putting a 25% tariff on agricultural imports from America, and farmers here felt the pain.

Chinese companies simply started buying products from elsewhere, especially Latin America. Brazil's soybean inventory, for example, is set to fall to the lowest level in 20 years as China has moved to buy up farm goods there.

Those are goods that in the past would have been bought from American farmers.

Now, President Trump did go ahead and put a 10% tariff on food imports from China, but that didn't make that much of a difference. As you saw, China's exports to the U.S. are only about half of America's exports to China, though that's a much larger share than earlier in the decade.

What has helped the U.S. farmers is President Trump's farm bailout program, instituted in May. By some measures, it's been very successful. As mentioned, it makes up a large chunk of the 40% of farm income that comes from the government or insurance companies.

But by the same token, that's a mark of failure.

Proud American farmers have been reduced to relying on aid instead of being able to live off of selling their crops. And the aid isn't covering the full costs of the trade war anyway.

He used to work 14-hour days behind a computer screen in a cubicle. Today he's retired. He punches no clock, and no boss determines how much his time is worth and how he spends it. Click here to witness this breakthrough.

Meanwhile, the cost to the taxpayer has been truly enormous. Already, the president's program to help farmers negatively affected by the trade war has paid out more than $28 billion in taxes.

Now I know that today, with government debt in the trillions, that may seem like a modest amount. But to give you an idea of how much this really is, think back to 2008.

That's when the federal government bailed out two of the three big U.S. car companies: GM and Chrysler. And to be fair, Ford did receive bridge loans for its auto financing arm so it could keep making car loans to new buyers – but it didn't have any of its shares purchased.

In the years since, this auto bailout move became hugely unpopular, seen by many as the government wasting money on companies that should have been allowed to go under. Others would say that it was a necessary step to keep the 2008 recession from spiraling into a depression.

After all was said and done, the U.S. Treasury reports that the auto bailout cost U.S. taxpayers $10.2 billion. That really puts into perspective what has already been spent helping American farms deal with the Chinese trade dispute – an amount that is 2.7 times bigger than the auto bailout.

And unlike buying shares in the car companies and giving loans, the farm program gives aid, not loans and equity infusions. This money is not being paid back.

In short, the American farmer is struggling.

But as the president has already shown with his massive farm aid program, he's aware of this. With the 2020 presidential election approaching and farmers having voted heavily for him in the last election, chances are that he will continue to try to help farmers.

That's why he keeps talking about China having to buy soybeans and other American farm goods as part of any trade deal. It's also why the Trump administration is so urgently pursuing that deal right now.

When that deal comes, the relief to American farmers and the Midwest will be huge.

It could also benefit your wallet…

How to Play This to Your Benefit

As you can imagine, stocks tied to American agriculture are struggling right now. For example, the Invesco DB Agriculture Fund (NYSEArca: DBA), an exchange-traded fund (ETF) that tracks the prices of corn, soybean, sugar, and other agricultural commodities, is down about 4.81% this year.

But once a trade deal between China and the United States is signed, you can expect this to bounce back up. President Trump has talked about China agreeing to buy $50 billion worth of farm goods from America as part of any deal.

That combined with the lifting of the 25% tariff on American farm goods sold in China would be a huge demand boost. And when demand rises faster than supply can keep up, so do prices.

Archer Daniels Midland Co. (NYSE: ADM), a company that stores, processes, and sells farm commodities, will also benefit. It's slightly up for the year already and has a dividend yield of just over 3%.

Once the trade deal lands, its business will boom, and the stock price should follow.

A similar story is likely for Deere & Co. (NYSE: DE), the famous manufacturer of farming machinery. Deere has suffered as farmers have been delaying investment amid the agricultural slump. But all that demand still exists, suppressed as farmers make do with older equipment because they have to.

Keep an eye on these agricultural plays while we wait for the trade negotiations to end. As usual, the real story isn't the one we're all being sold on TV right now.

Finding the underlying story and how that impacts your wallet is what really makes a difference.

This Breakthrough Could Transform Your Life

What if… you discovered that insiders like Warren Buffett, Bill Gates, and Jeff Bezos were making the same investment, in the same company, at the same time?

What if… this type of mysterious activity always occurred between 9:30 a.m. and 10:30 a.m., Monday through Thursday, and you had something that could detect it happening in real time?

Do you think this could transform your life? It certainly did for the man who invented this breakthrough. It helped grow his account to $5 million in two years. Find out more right here…