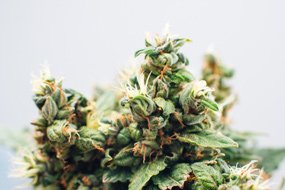 Cannabis investors should not be deterred.

Yes, 2019 was a challenging year for marijuana stocks. Many big-name stocks lost significant value. One of the most popular marijuana ETFs, ETFMG Alternative Harvest (NYSE: MJ), is down more than 40% in the last 12 months.

In the narrow focus of one year, it looks disastrous. But this has always been a long-term industry.

How many industries do you know that have the potential to grow from a market size of $10.8 billion to $300 billion within 10 years?

None, but that's the potential of the cannabis market.

The biggest impediment to growth is legalization. With only a small portion of the United States legal, the market for pot is relatively small at $10.8 billion by some estimates.

But with the whole country legal?

Take those estimates up a notch to $300 billion, according to the National Institute for Cannabis Investors.

With such a gap from the current to the potential, the valuation of marijuana stocks in the near term is a moot point.

Last year, for some yet unknown reason, investors chose to focus on near-term earnings.

It's only natural that near-term earnings fall short of expectations. Especially when compared to the potential of the market.

With such high expectations, pot stocks had no chance in 2019, especially when you consider the rising risk of recession. Human nature will lock in profits at such moments no matter what the potential.

That all changes in 2020 as we get closer to the full legalization of marijuana. Unfortunately, the federal government won't be leading the way to full marijuana legalization.

It will be individual states that bring us to the finish line of legalization. In 2020, nine states will be voting on marijuana legalization.

Here's a look at each one…

Legalizing marijuana in a red state is no easy task. North Dakota started its pot journey on the medical side in 2016 after a failed attempt in 2015.

The next step is getting recreational use on the ballot for 2020. The North Dakota Marijuana Legalization Initiative has until July to obtain enough signatures to make the cut for the next election.

It needs just over 13,000 to get there. That seems doable even in a low-population state like North Dakota.

North Dakota's neighbors to the south are working furiously to legalize both medical and recreational marijuana use.

There are ballot initiatives for both, and they've each obtained the necessary signatures to make it on the ballot in November.

Pot investors should expect at least one of the initiatives to pass, most likely in the medical marijuana space. Even if recreational does not pass, every move forward helps.

Next States to Legalize Marijuana: Missouri

The "Show Me" State made medical marijuana legal in 2018. Up next is recreational marijuana. If the state lives up to its nickname, full legalization should be no issue at all.

The benefits of marijuana use are becoming more and more mainstream. The Missouri initiative has until mid-May to collect 160,000 signatures. With large populations in St. Louis and Kansas City, investors should expect Missouri to go fully legal in November.

Next States to Legalize Marijuana: Arkansas

In a small state like Arkansas, it will be more difficult to obtain the 89,151 signatures needed by July to get recreational marijuana use on the ballot in November. The state did pass a constitutional amendment in 2016 for medical use, so anything is possible.

In addition to full legalization, there is a separate initiative to expunge prior marijuana convictions, indicating a strong commitment to the issue in 2020.

Next States to Legalize Marijuana: Mississippi

Like South Dakota, Mississippi is slightly behind other states in regards to marijuana use. In 2020, the objective for supporters of cannabis will be a medical-use legalization bill to start the ball rolling to full legalization.

Activists have already obtained necessary signatures for the medical use initiative and submitted to the state. If confirmed by the secretary of state, the initiative for medical use will be on the ballot in 2020.

Next States to Legalize Marijuana: Idaho

Idaho is doing its best to diversify away from its primary crop, potatoes. Cannabis could be the answer, but like Mississippi, the state is somewhat behind the curve.

The first step is a medical use initiative. Advocates need to obtain just over 57,000 signatures in order to make it on the ballot. It seems like a no-brainer for farmers to get behind the initiative as a way to diversify.

Next States to Legalize Marijuana: Nebraska

The Cornhusker State has tried repeatedly to approve medical marijuana use to no avail. For whatever reason, those in the state's one-chamber legislative house have not been willing to change the law to allow marijuana use for medical reasons.

In 2020, advocates are attempting to go straight to the voters with a ballot initiative. They will need 122,000 signatures to get there. While medical use is not the same as full legalization, it is a start.

Now, those seven states will all be a boost to marijuana stocks. But the following two will be the biggest catalysts for the sector by far…