A group of Girl Scouts were seen selling cookies outside Chicago's Dispensary 33 on Sunday (Feb. 9). And with that, Illinois' $40 million in legal cannabis sales is no longer the biggest news driving cannabis stocks today.

In fact, this story is arguably much bigger than cannabis legalization or state cannabis tax revenue. It's about cannabis becoming normal.

And it could mean more than 110% growth for one cannabis stock this year... 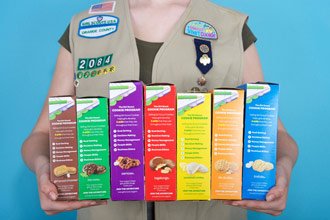 Marijuana is on its way to becoming so normal that Grand View Research predicts it will be a $66 billion industry by 2025. Right now, that's more than a 400% leap from today's $13 billion.

It's easy to draw a line from political news to cannabis stock movement. But while the politics are important, it's cultural change that drives political decisions.

Today, we're going to show you the impact of culture on marijuana stocks. Then we'll show you the pot stock with the most to gain when the industry blows up.

Our top cannabis stock today is not just one of the best cannabis buy-and-holds around. It also has strong upside potential with the marijuana industry shocks coming our way. It even climbed 4.3% this week after the media caught wind of these Girl Scouts.

It's a wild contrast for many still viewing marijuana through a taboo lens. But you might be surprised to find it's not the first time Girl Scouts have done this.

The New York Times reported a similar story last February, when a California Girl Scout sold around 300 boxes near a legal marijuana shop in six hours.

Of course, it was criticized by Girl Scouts across the country. A Colorado troop tweeted that they don't allow their Scouts to "sell cookies in front of marijuana shops or liquor stores/bars."

This year's Girl Scout marijuana story has been met with more smiles than last.

Last week, a different Girl Scout troop even set up in front of a liquor store to recommend alcohol-cookie pairings to passersby.

The fact that one of America's most traditional organizations, more than a century old, has warmed up to cannabis legalization so quickly is a great sign for the legal marijuana industry as a whole.

But until now, adult-use cannabis hasn't had any major "family friendly" angle to the public eye. Controversial as it may seem, the Girl Scouts may have put the nail in the coffin.

Marijuana is becoming a part of everyday life.

And it means one of our top cannabis stocks is on its way to finishing the 92% run it started at the beginning of the year.

This marijuana stock has already gained 22% since January, Girl Scouts leading the way. But there is still a lot of juice left for investors who still want in - more than 50%.

We want to share this one with you while there's still time. In case you miss the window, we're sharing a 110% profit opportunity in another top cannabis stock as well...

Last Chance to Get This Cannabis Stock