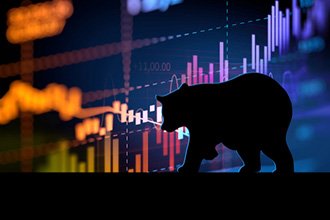 In the wake of the stock market's historic nosedive, financial terms like "bear market" and "recession" have replaced "bull market" and "boom."

It's been a while since we've had to use those terms – the last bear market bottomed out March 9, 2009, a long 11 years ago – so some investors may be rusty on what they mean and how they relate to each other.

All of this was sparked, of course, by the coronavirus pandemic. As millions of people started practicing self-isolation, many types of economic activity have come to an almost complete halt.

When the implications of a U.S. economy in lockdown became clear, we had a stock market crash.

Now, we're in the middle of a bear market and an almost-certain recession. But while related, they're not the same thing…

The Link Between a Bear Market and a Recession

To understand the connection between these terms, we first need to define them:

That said, it appears unavoidable that the coronavirus bear market will be linked to a recession this time around. Travel has slowed to a trickle. Restaurants are closed. Movie theaters are closed. Retailers that don't sell "essential" goods such as food and household supplies are shuttered. The pandemic has been like sand poured into the U.S. economic engine.Bear markets and recessions often occur together, but it's by no means a rule. According to CNBC, four out of the 11 bear markets since the end of World War II had no corresponding recession. 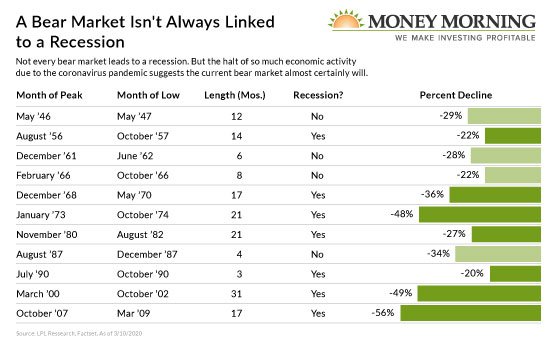 Goldman Sachs says that the U.S. economy likely shrank 6% in the first quarter (which ended March 31) and will shrink a stunning 24% in the second quarter.

The St. Louis Federal Reserve has estimated 47 million jobs could be lost. That would push the unemployment rate to 32% – seven percentage points higher than its peak at the height of the Great Depression.

Mislav Matejka, head of global equity strategy at JPMorgan, notes that the combination of layoffs, furloughs, and closings is devastating consumer spending – 70% of the U.S. economy. Matejka sees the impact lingering into the latter half the year – in other words, no V-shaped recovery.

"While consensus view still appears to be a quick recovery, recessions tend to linger," Matejka said in a research note. "It took equities on average 18 months to record the final low in the past."

There's also the wild card of an attempt to return to normal too soon that would trigger a "second wave" of coronavirus cases.

Despite some optimism on Wall Street over the past week, a cold-eyed look at what the economy is facing suggests the current bear market isn't over – and could easily dip below the March 23 lows.

At some point, when we have a vaccine and confirmed, FDA-approved treatments for COVID-19, the economy (and stocks) will rebound. But we just don't know when that will happen.

In the meantime, we have some ideas for investors trying to cope with this bear market…

How to Survive the Coronavirus Bear Market