The assumption that the economy will spring back to life in the next few months is gaining traction on Wall Street. Despite an endless cycle of bad news - record 14% unemployment, coronavirus cases growing by 4% a day, and a vaccine seemingly out of reach - the Nasdaq index is back into positive territory on the year. 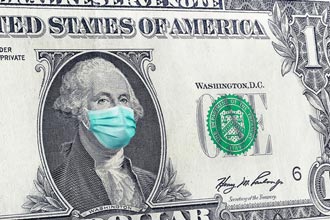 Aiding the momentum is a growing chorus of business leaders, analysts, and politicians populating TV sets across the country, pushing for the end of statewide business restrictions.

They argue that we've done all we can do to slow the spread of the virus, and now it's time to bring the economy back to life. They reason that by returning to business as usual, the economy will immediately spring out of this decline, creating a "V-shaped" recovery like the pandemic was a mere economic hiccup.

That simply isn't going to happen.

The economic effect of the coronavirus pandemic and the shutdowns, lockdowns, and social distancing practices is unprecedented. It will change our society and economy permanently. Just like the Great Depression and the Great Recession, the effects of the "Great Isolation" will linger with us for decades.

Make no mistake; there's significant downside risk ahead once Wall Street wakes up to the new reality. A reopened economy won't mean much when businesses operate at a fraction of their previous capacity. That'll be enough to light off another plunge in stocks.

But the changes to the economy are a catalyst for a select group of companies. While you've undoubtedly heard of a few of these - Zoom Video Communications Inc. (NASDAQ: ZM), for example - one stands heads and shoulders above the rest.

Before I show you this stock that will sit atop this transformed economy, here's why what's happening is so profound...

Why a "V-Shaped" Recovery Is Off the Table

Wall Street is wishing away all of the bad news by assuming things will simply return to normal. But the sheer scale of the damage should tell you that's a fantasy.

The chart of weekly unemployment claims will be a staple in economics textbooks forever. In fact, it's so severe the 2008 recession looks like a non-event. 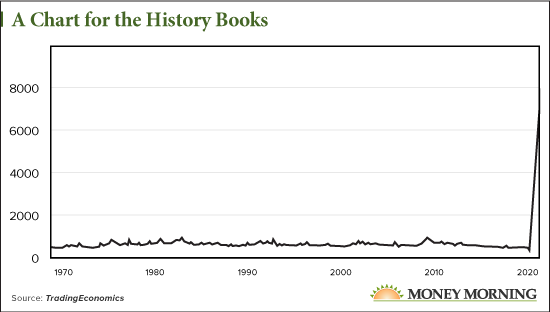 The same is true for GDP. If projections for Q2 GDP are accurate, this will be the worst recession since the 1930s.

The chart below shows the first quarter's 4.5% GDP fall plus the Fed's consensus projection for Q2 GDP growth. If it holds up, the hit to the economy will be unprecedented... 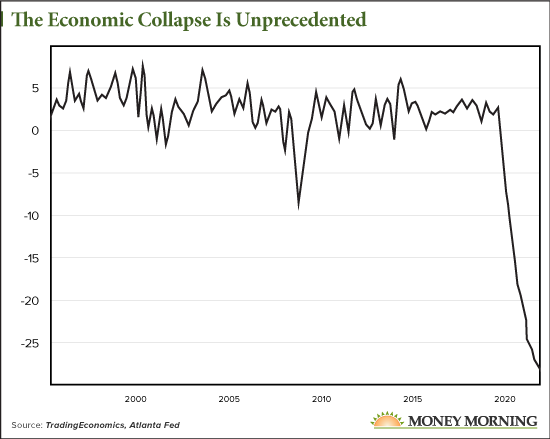 And the government's spending will be reckoned with too.

The Fed has pumped an incredible amount of money into the economy. If you thought the Fed's balance sheet was a problem in the wake of its response to the 2008 crash, it's nearly doubled since 2014. 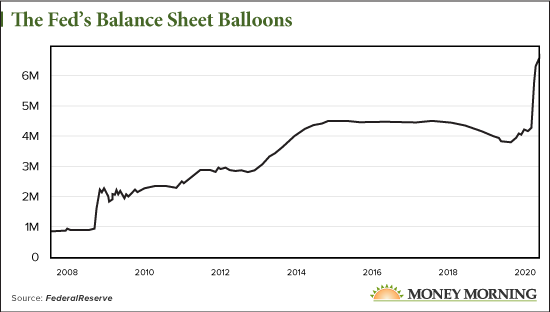 That's on top of a record level of borrowing the Treasury has done to pay for the damage. The Treasury Department announced it borrowed $3 trillion this quarter alone.

The government will be dealing with these burdens for decades, whether they're successful or not. And that's the best-case scenario. Rampant inflation ignited by the Fed's wave of money or ballooning interest payments threatening the government's solvency could be disastrous for the economy.

The idea that these incredible numbers will be a simple blip is unlikely. Impossible might be closer to the mark. Even as the government throws trillions of dollars at the economy to keep businesses afloat and provide a stopgap for people who've lost work, the business world is permanently changed.

J.Crew was the first retail store to file for bankruptcy since the crisis started. Neiman Marcus followed right behind it. More will come. The airlines are bracing for at least three years of weak travel demand and a smaller industry when it does stabilize. Warren Buffett sees no case for owning any of them right now.

That says nothing about the mom and pop businesses across America that won't survive the Great Isolation either. The program meant to keep them alive was notoriously corrupt, with massive public companies, like Veritone Inc. (NASDAQ: VERI), soaking up millions meant for local businesses.

Not only are these small, homegrown companies unlikely to come back once they go under, but it will collectively pull billions out of the economy. That will fuel the sort of vicious cycle that spirals the economy into a prolonged recession, one the government will have little ammunition left to combat.

Of course, the changes to the economy have led to a number of success stories, and investors have already raked in the gains.

And there are plenty more gains to come for investors in the companies benefiting the most from the changes.

The one we'll show you isn't just a short-term play as enthusiastic investors jump in - though it has short-term upside too - it's a long-term buy and hold that could be a staple of your portfolio for years to come...

The Companies Profiting from the Great Isolation