Canopy Growth Corp. (NYSE: CGC) is one of the most popular stocks in the marijuana industry. The company has the largest market cap of any cannabis company in Canada. It also has name-brand appeal through partnerships with celebrities like Seth Rogen and Drake. 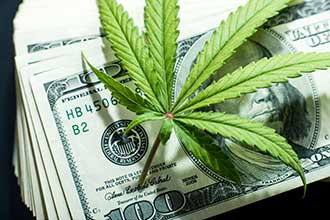 But there is also plenty of competition in the cannabis industry.

Let's talk about another stock that comes up a lot when we talk about investing in cannabis. Many have asked themselves whether to invest in Canopy Growth, or another marijuana industry rival, Green Thumb Industries Inc. (OTCMKTS: GTBI.F).

Green Thumb is a lesser-known stock. But believe it or not, the company brought in more revenue than Canopy last quarter.

Today, we're going to take a look at both and see which is the better investing option.

Why Invest in Canopy Growth?

Canopy Growth has been putting its name to good use, and that has translated into real business success. The beverage giant behind Corona and Modelo beer, Constellation Brands Inc. (NYSE: STZ), started buying stakes in Canopy in 2017.

Constellation has been on a mission to produce cannabis beverages. And upping its stake in Canopy is going to help.

Constellation recently announced it was exercising 18.9 million warrants to buy Canopy shares. The company's CEO, Bill Newlands, said recently that Canopy is "best positioned to win" as a pure play in the future marijuana industry.

COVID-19 lockdowns inspired a lifestyle change that's kicking a new billion-dollar market into high gear – and this stock is the best way to play it. Get the pick here – it's free…

Of course, this sector still has a ways to grow. October 2018 was the first time Canada legalized adult-use recreational marijuana. Medical marijuana is currently only legal in 33 states, excluding CBD, which only became legal to transport across states in 2018 as well.

The more distant future is still very promising for Canopy Growth. Canopy is sitting on $1.3 billion in cash as of its last quarterly report. Much of that is thanks to investment from Constellation.

This company is a leader in Canada, but it could also make its way to the United States down the line. Canopy operates in the CBD space as well. So even before cannabis is further legalized in the U.S. Canopy can take advantage of CBD.

For when marijuana is legalized, Canopy has a chance to acquire U.S. marijuana company Acreage Holdings. The companies made an agreement where Canopy acquires Acreage if marijuana becomes federally legal in the United States.

Constellation Brands' ex-CFO, David Klein, happens to be Canopy's new CEO. Under his leadership, the financials have been solid, and the company has launched new products.

Canopy Growth will be a powerhouse in the future. But can it best Green Thumb Industries?

Why Invest in Green Thumb Industries?

Green Thumb Industries might not have a mega-partnership with one of the biggest beverage companies in America. But it's doing fine on its own.

Believe it or not, this company is 10 years older than Canopy Growth, yet its revenue is growing faster. Green Thumb's revenue in Q1 2020 grew 267% from the year prior, to $102.6 million. That was more than 35% from the previous quarter.

The great news is that GTI is just getting cranked up. It's continuing to open new stores in states with sizable legal cannabis markets. GTI currently has 44 retail cannabis stores in the United States but owns licenses for another 52 stores. That totals 96 locations in 12 different U.S. markets. Its markets include states that have already begun to adopt recreational marijuana, such as Illinois.

Green Thumb recently broke $2 billion in market cap. That's about only one-third of Canopy's growing market cap. But just like Canopy, this pot stock has a long way to grow.

Shares trade for a little less than Canopy Growth, at $9.81. Analysts say shares could reach over $430 million in revenue this year. And that's going to send the stock soaring.

But higher than Canopy? Let's see…