IPO investing has a new friend in space exploration. This is going to be a huge market in the future. With the establishment of the U.S. Space Force in 2019, a growing interest in civilian space travel, and even talk of colonizing other planets.

Momentus could be one of the shining stars of this industry. The company was in the news this summer for its partnership with SpaceX. Elon Musk's SpaceX is possibly the most visible space exploration company around and was already known for its ridesharing services. Companies along for the ride could have real potential at first-mover advantage in the budding market.

Momentus could very well be one of those. But the company is still private. 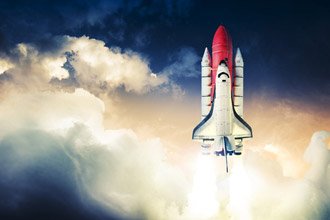 This is still a new company in a very young, albeit exciting industry. But it raises an important question for investors right now. Is the Momentus IPO worth waiting for?

Let's talk about this company first, then we'll get into whether you should buy Momentus stock once it goes public. There might be a better profit opportunity for you on the horizon…

Momentus is a California-based, in-space shuttle service. It was founded in 2017, so it is still relatively young.

Its mission is to extend "enterprise and existence" to space, and it believes it can do this by "creating truly efficient in-space transportation."

Its recent partnership with SpaceX involves Momentus buying six slots on the SpaceX SmallSat Rideshare Program missions. This includes five trips to sun-synchronous orbit, which is a nearly polar orbit around the earth. The sixth one will go to low-earth orbit.

Momentus space shuttles will carry "payloads" launched into space. A "payload" can be anything that carries weight into space – this can be a satellite, space probe, humans, or some other cargo. In these launches, the payload will consist of satellites and space probes.

With the SpaceX partnership, Momentus solidifies its name among first-movers in the emerging space industry.

While Momentus stock isn't available to the public yet, here's what we know about its investment prospects…

And Momentus certainly has a shot at claiming a good bit of that.

That said, the company is still quite new. Momentus started out with $8.3 million in seed from early-stage investors in 2018. As recently as July 2019, it raised $25.5 million in a Series A funding round.

With these projects in mind, others down the road, and the costs of joining SpaceX rideshare missions, Momentus has its work cut out when it comes to profitability. It could be some time before the balance sheet goes green.

However, with the speed of its innovation, it could happen sooner than we think. One partner from Prime Movers Lab was impressed by the speed at which Momentus matured its water propulsion system to "deliver the world's safest and most affordable in-space transportation services."

Momentus does have great advantage in being a first-mover in this industry. As long as it can build trust with its partners, investors should keep an eye out.

But while you wait for an IPO, you should know that startup investing is no longer just for venture capital firms and billionaires.

You can do it too. And maybe the next IPO could be for one of your investments…

The Jumpstart Our Business Startups (JOBS) Act of 2012 is dramatically changing how investing works. This piece of legislation made it possible for just about anyone to invest in startups.

This creates an investing opportunity for many that did not exist before. The JOBS act made it so that individuals could have access to certain companies pre-IPO. For the first time, crowdfunding startups became a federally-approved way to invest.

People no longer needed deep pockets or friends in high places to become angel investors. They could start doing it from the comfort of their own home.

Imagine being an early investor in Amazon.com Inc. (NASDAQ: AMZN). Back in the 90s, there was a handful of early investors in Jeff Bezos' new project. Their money grew 17 million percent. Every dollar they put in became $170,000.

That's what investing in a successful startup will do.

The only difference, however, is that these investors put tens of thousands into Amazon. This was pre-JOBS act.

What's left is simply knowing where to invest in startups, and knowing how to pick the winners.

Here's how you can start becoming an angel investor…