Electric vehicle sales are expected to more than triple by 2030. But you could profit from it even sooner with our "pick and shovel" play. 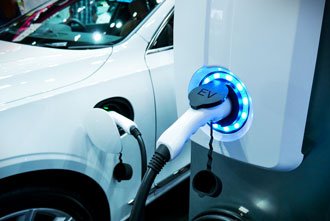 You see, when you buy stock in the tools or services that support an industry, you're digging deeper than most people in that market. The price is less volatile, and if the industry is going to stick around awhile, consistent growth will follow.

Copper is used for more than pennies. In fact, there's a copper ETF that could earn you bigger upside, faster than any EV stock in 2021.

There were 1 million all-electric vehicles on U.S. roads in 2018. But according to the Edison Electric Institute, annual EV sales will be more than three times that by 2030 - that is, many millions on the road.

Auto sales could triple, but we think it's going to be much more.

But before you drop what you're doing and go buy another share of Tesla Inc. (NASDAQ: TSLA), hear me out.

Of course, this depends on factors both in and outside the EV market. But 2021 will be a year of EV catalysts, nonetheless, which raises copper demand.

Not only is Tesla adding to its lineup with the Cybertruck, General Motors Co. (NYSE: GM) is releasing its first all-electric Hummer. Toyota Motor Corp. (NYSE: TM) is also throwing its hat in the ring with a new electric SUV.

And this is just the tip of the EV iceberg over the next decade. Entire new companies are making names for themselves, like Workhorse Group Inc. and Lion Electric Co. The former specializes in trucks, the other in buses.

Rivian plans to finally deliver about 20,000 of its R1T trucks in June.

Again, this is all huge for copper, and you'll see why in a second.

Copper is not just a component in EV production. You could even say it's the component.

It's highly conductive, durable, and malleable. And that makes it ideal for batteries.

Copper is used in almost every major EV component, including the motor, inverter, and electrical wiring. In fact, you could find about a mile of copper wiring in an EV.

The closest alternative to copper is aluminum. It's only a fraction of the price, but you also get what you pay for: You need about double the aluminum to do the same job as copper.

In short, copper is the best metal for conducting electricity. It's used in both car batteries and charging stations.

That's why an EV revolution is likely to have such a bearing on copper prices. An EV uses more than three times the copper used by a gas-powered car. And that increases with the size of the car.

A fully electric bus needs around 15 times the copper used in a gas-powered passenger vehicle. Now you see why companies like Lion Electric, an electric bus producer, are so exciting.

Additionally, maybe you've heard of those "superchargers" that give an EV 80% of its power in 20 minutes. That's copper at work.

That's all going to change in the years to come. More charging stations are on the way, which increases the demand for copper as well as electric vehicles. And that raises the value of copper in turn.

Wood Mackenzie predicts there will be 20 million EV charging stations worldwide by 2030. Global copper consumption will have increased by 250%.

That makes copper a potential cash cow for the next decade.

Last year, rumors circulated that Tesla was trying to mine its own lithium in an effort to reduce the cost of its EV batteries. You have to wonder if carmakers will begin stockpiling copper in a similar way.

There are not many copper ETFs trading in the United States right now. One of these is the U.S. Copper Index Fund (NYSE Arca: CPER).

CPER has $28.3 million in assets under management, exclusively copper futures. It tracks the SummerHaven Copper Index Total Return, which is made to reflect the performance of a copper portfolio collateralized by three-month Treasury Bills.

The index returned 16.8% last year but could soar even higher in the next 12 months.

This ETF is going to pay off with the new presidential administration, more EV production, and more charging stations.

Expect even bigger gains if we get the economy up and running with a COVID-19 vaccine. China, responsible for half of the world's commodity demand for its manufacturing, can be a huge catalyst for copper.

On average, copper tends to closely follow the ebb and flow of broad markets. It's called a "cyclical commodity" for that reason.

This means that when the economy is doing well, copper futures rise. When things are looking down, copper falls.

We're seeing a minor rise in copper futures right now. The Wall Street Journal reported a 2% rise for 2021 so far. It's close to its highest price since 2013. But analysts think we could see much more out of the commodity.

The new presidential administration has vocally supported stimulus and renewable energy efforts. If their ideas come to fruition, we'll see a boost in consumption paired with increasing interest in EVs.

We already know about California's ambitious goal to have gas vehicle sales banned by 2035. Now, we could see similar rhetoric on the federal level.

In other words, copper awaits two major catalysts this year. On one hand, stimulus could send the broad market indexes higher. On the other, EV stocks are getting popular.

Why? Well, copper happens to be one of the main components used to make EV batteries.

The metal went up 25% when China managed to contain the virus and resurrect its own economy.

Of course, you can buy any copper stock you want. But a copper ETF will give you a wider range of exposure and act as a great inflation hedge in the process.

Grab shares of CPER before EV stocks get rolling.