Efforts to get COVID-19 vaccines into Americans' arms are picking up the pace.

The CDC says around 1.5 million people, give or take, are getting the shot every day, and the number of people vaccinated every day has outpaced the number of newly infected people for a few weeks now.

That means the end of the pandemic is on the way, and that means recovery is picking up steam, too.

And strange as it might sound, that recovery has actually been the cause of a lot of the chop we've seen in the markets this past week.

Interest rates are creeping up, even though they're still near rock-bottom if you look at any kind of long-term picture. That's been good for financial stocks. Money's been rotating out of the stocks that performed so well during the pandemic and into stocks that should do well in a growing, waking-up economy, like energy - we've talked about oil demand here before - the industrials, and cyclicals.

With such a huge shift in the way capital's working right now, it can be tough to tell where the hyped-up froth is, where the stocks to sell are, and most importantly, where the best buys are.

Let's dive in - I've got a great recovery play lined up.

Let's Be Clear About What's Happening

There's no doubt: Recovery is coming, and before long, pent-up demand is going to pour out like gas on a fire. But I have to say, I see a speculative bubble is forming, too. People who may or may not have major-league cabin fever are piling into travel and leisure stocks that may be buys one day, but not now.

Unfortunately, folks jumping into these aren't "early" - they're setting themselves up for a nasty shock.

The biggest travel and leisure names have been absolutely on fire lately - a lot of them are trading near or even above pre-pandemic levels, which makes no sense to me.

REVOLUTION: Huge numbers of retail traders were able to turn the tables on Wall Street and make a killing on the red-hot "Super Squeeze" trade. Here's how anyone could do that...

As I already mentioned, airlines are still only doing a fraction of the business they were before COVID-19. Oil demand still has not fully recovered, with jet fuel demand not expected to recover until 2022 or even 2023.

Stocks like Southwest Airlines Inc. (NYSE: LUV), Carnival Corp. (NYSE: CCL), and other popular stocks this week have relative strength index (RSI) readings at, near, and above 70, which is textbook "overbought" territory. I'd advise waiting on a pullback from their current heights before jumping in.

Like I said - the time is coming. It's basically inevitable. But the time isn't right now, and if you're in now, you're running the risk of walking into a hard, sharp sell-off. The gains will come later.

Here's the Smartest Play This Week

The thing is, there are some sweet deals to be had in the "recovery stocks" space that's leading the market right now. One of my favorites is Petróleo Brasileiro S.A. (NYSE: PBR) - Petrobras.

Like the name suggests, it's a Brazilian oil company with a $51 billion market cap that's recently had a massive leadership shakeup and 21% drop. At the same time, oil and gas prices are moving up in Brazil and in most of the world right now in anticipation of the global economy going full tilt, or close to it, sometime in the second half of this year. 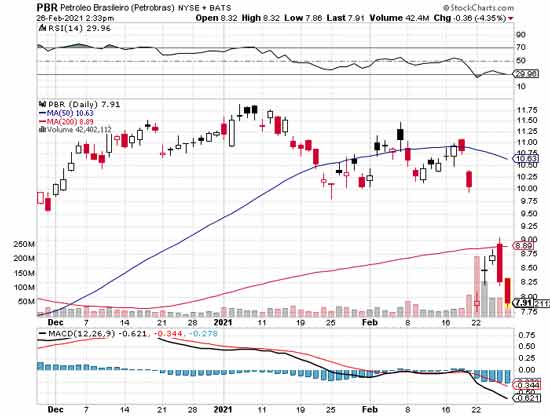 My proprietary S.C.A.N. algorithm picked up on the price fluctuation and found two of the biggest firms on Wall Street quietly sneaking in to Petrobras.

When you identify big money moving into a stock, that's a big, neon "BUY" signal. I sent my subscribers detailed instructions on a possible trade they could make that could lock in a 100% win in a couple of weeks, maybe less. They've already had the chance to take some money off the table on half that position. You can go right here to learn more about S.C.A.N. and how I use it to give Project 303 subscribers a crack at these.