It was obviously never lacking in the popular films department, but it's been on a savvy acquisition spree for years now, grabbing outrageously lucrative entertainment franchises worth far in excess of $32.6 billion - Star Wars, the Marvel Cinematic Universe, The Simpsons, the Pixar animated flicks, and even National Geographic documentaries.

Still, it's not invincible, and I'm starting to see some signs of weakness that could add up to massive profits for folks on the right side of the trade...

RELATED: Watch and learn how the "Super Squeeze" helped regular investors and traders beat Wall Street at their own game. Click here to see...

But, of course, these days, the end of the pandemic is looking closer than ever. Disney has announced its intention to begin a phased reopening of its theme parks in April - more revenue for the money mill.

But... I don't think that's the smart move right now, and this chart with price action and price momentum agrees - it shows a divergence that indicates a trend reversal could be just around the corner. 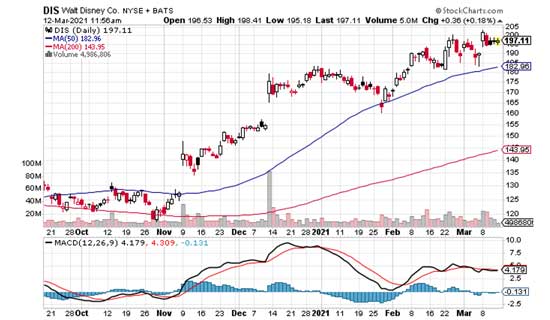 Trading stocks might be the best way for regular investors to maximize their profit potential, but of course it hasn't always been easy... until now, that is. We've recently seen that small retail investors have been able to take some of Wall Street's richest, most powerful players down to the mat. That wasn't necessarily a one-off. I've made some tweaks to my proprietary S.C.A.N. algorithm that can help me identify what I think are the two best indicators of a "Super Squeeze" unfolding. Super Squeeze traders have seen profits like 1,040% on FIZZ... 5,416% on AMC... even 7,272% on BBBY. Take a look at this...