Outbrain stock just went public after it was made available through the Robinhood trading platform. Shares sold for $20, below the predicted range of $24 to $26. 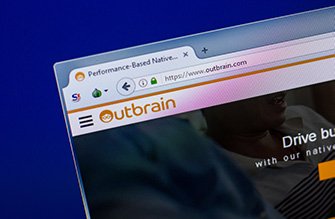 The Outbrain stock ticker OB can be found on the NASDAQ today if you didn't manage to get shares through Robinhood IPO Access.

This company is comparable to Taboola, another Internet advertising company that went public recently via SPAC merger.

Taboola stock has since not performed so well, but investors in these companies look for more than short-term windfall. The native advertising sector is due for some intense growth over the next five years.

Here's what that means for Outbrain stock and where it's headed.

Outbrain is a platform for native advertising based in New York. It was founded in 2006 but has offices in D.C., Milan, Tokyo, and more - a total of 13 cities worldwide.

The Outbrain platform offers a whole interface for promoting stories on a website. It also promotes ads for other websites.

The sponsored content promotion is Outbrain's bread and butter. You may be familiar with those clickbait ads at the bottom of news articles you read. Well, Outbrain is responsible for getting those in front of you.

It does this via "chumboxes" - that's the fancy word for the square tiles at the bottom of your screen when you finish reading an article.

Companies will pay good money to have their content reach as many eyes as possible. Outbrain's content recommendation widgets go through outlets like CNN and The Washington Post, so you know they can reach a lot of people.

The company had a monster Q1 2021, raking in $228 million in that quarter alone. It has already made $10.7 million profit in the first quarter of this year.

And profits could get even bigger in the coming years. This is a booming industry.

Outbrain is one of the main players in this market, so investors could get a piece of that growth.

Is Outbrain Stock a Buy?

People who know Internet advertising know Outbrain. But they're also not the only name in native advertising.

This could boil down to a competition between two major players: Outbrain and Taboola. And here's the difference between the two.

Taboola boasts more traffic than Outbrain, reaching over 1.5 billion people monthly on sites like CNBC and Forbes. Outbrain, however, is cheaper and easier to use for people new to native ads.

One advertiser compared the two platforms. It paid $0.10 for Outbrain and $0.45 for Taboola, but received about the same quality from both.

The essential difference between the two platforms, then, causes a dilemma typical to the technology world.

Taboola is more expensive but more customizable - it sets you up with a sales rep.

Outbrain leaves you more or less on your own, with a more restrictive set of options. But the benefit is that it's straightforward, quick, and easy to set up.

This could be an important factor in determining the winner of this market. With how the content market is growing, more novices will be looking for ways to advertise. Many would prefer to have guardrails for their decision making rather than a rich set of options.

Think about it. Most people would rather build a website for their business via Wix or SquareSpace than become a professional web developer.

If Outbrain hit a valuation of $1.07 billion at IPO, giving it a 1.39 price/sales ratio. Compare that to Taboola's price/sales of 1.5.

Any price/sales ratio under 2 is solid. But this is one way to tell if the Outbrain stock price range is too high to buy. Since it's lower than Taboola, it could have some ceiling left.

But, if it does manage to rule the native ad world, the stock price could double between now and 2025.

In the Time It Takes to Watch a Movie...

You could be setting yourself up to add thousands to your portfolio.

You read that correctly… just 90 minutes of your time per week is all it takes to show you exactly how this revolutionary, just-released trading system works and how you can score big with it – regardless of what the markets are doing.