Moderna Inc. (NASDAQ: MRNA) emerged as one of the hottest stocks in the early days of the pandemic. It gained 520% over 12 months as vaccines rolled out.

The price has soared to a whopping high of $413 in the last year. But some analysts think it could be overpriced, even despite new booster shots on the way. 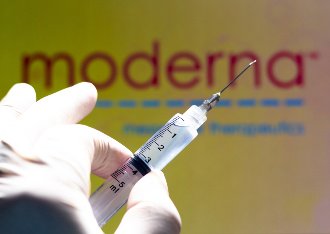 The Biden administration announced new boosters for decreased immunity over time. Initially, that seems like new revenue, but the Moderna stock forecast for 2025 raises debate over whether shares are already priced for boosters.

With so much mystery around the future of COVID-19, you will see a wide range of opinions on this one.

One JPMorgan Chase & Co. (NYSE: JPM) analyst wrote that it's "saving the world even though valued like saving the universe." They think the stock could lose half its value over the next year. Others including Bank of America, Piper Sandler, and Oppenheimer have downgraded Moderna.

Really, Wall Street often has a habit of missing the field for the trees.

If the pandemic persists and it can produce the same quality at the same pace as its first vax, the stock may still have plenty upside.

But the COVID-19 vaccine might only play a small role in Moderna's future success...

For starters, Moderna and Pfizer Inc. (NYSE: PFE) are the only companies involved in the Biden administration's new rollout plan. Limited competition is always good news for a stock.

It's what made Moderna one of the best stocks to buy from the beginning.

The company was further along in its mRNA research than about every other biotech vaccine maker. And its focus on that enabled quick and effective vaccine distribution.

But, again, the COVID-19 vaccine is not even the only thing going for Moderna stock...

The company has been busy researching and developing messenger RNA technology since its founding in 2010. Messenger RNA (mRNA) basically tricks cells into creating proteins that look as if they've been infected by something that a virus uses to infect cells.

The last eight years of research positioned the company to succeed amid the vaccine race - mRNA vaccines are much easier to mass produce.

Money Morning Defense and Tech Specialist Michael A. Robinson gave some conservative projections on Moderna, with per-share profits averaging 25%. At that rate, earnings will double in about 33 months.

Creativity in biotech research has boomed internationally, with the United States at the forefront.

It's wheeling out life-saving vaccines in record time. And it's developing other game-changing tech breakthroughs.

Moderna has more than enough potential to become a titan in the industry, already making waves.

Yes, the stock has run up quickly, so you naturally expect a dip. But the dip will not last long.

MRNA technology could play a much bigger role in the future of medicine than it does today. That's why WalletInvestor gives Moderna stock a target $710 target by 2025.