It's the most wonderful time of the year - and I don't mean the holidays. I'm talking earnings season.

This one is going to be a biggie, one of the most important in decades. I won't get into what's at stake, and why - I don't want to depress you this early on a Sunday, and besides, that's all over the news you can get anywhere.

What I do want to do is surprise and delight you - and line your pockets with cash starting tomorrow morning. And to do that, I'm going to share a list of stocks I'm watching for big moves right now.

But what you can't get elsewhere is the best way to make money at a time like this. It's dead simple, and if you do it right, you can bank a day's pay in minutes.

Even better, you can trade like this throughout the year - you don't have to wait for earnings season, but it's that much more powerful if you trade this signal now...

This Is the Best Time to Trade

This is something I like to call "the Fade."

The "Fade" usually happens shortly after we see a big pop in premarket action on a stock on the morning or day after it reported quarterly numbers. This is because during premarket trading, institutions and smart-money investors bid up shares.

Again, this isn't only an earnings-season phenomenon; it goes down year 'round. But the effect is really powerful around earnings.

Retail investors can see this, and, right when the market opens, they rush in to buy the stock on all that good news.

But all too often, we see something incredible happen not long after the retail investors rush in. The stock suddenly reverses course and starts to fall - percentage points in a matter of hours, sometimes even minutes.

What's happening there? No mystery: The funds are taking profits, and those late retail investors are left holding the bag or, more to the point, holding rapidly depreciating stocks.

Now, naturally, the best time to move is just when this pivot happens.

And I can pinpoint exactly when this "event" occurs.

I use something called volume-weighted average price - VWAP. To most folks, it's just a line on a chart, but when stocks get too far above or below that line... there's cash to be made.

These Stocks Have Serious VWAP Potential

With that said, here are a few of the tickers I'm expecting big moves on - something I call my rolling watchlist. I'm looking at these long term.

I have a list of stocks that changes just about every day, but these tickers stay on my radar for weeks on end. And remember, I'm not looking for fundamentals. I'm not looking to fall in love with the executive team or looking for anything like commitment - I'm just watching these stocks for the right moves, then we're in and out.

Reading time is over. I've told you a little about how this works, now I want to deliver on what I promised and show you how it's done. You can go right here to watch how I set up and make these kinds of trades - and learn how you can join me just about every trading day for live sessions.

A well-groomed, blue-blooded so-and-so wearing a bespoke suit and a crisp collar, sporting a Rolex and carrying a briefcase worth more than your car...

Someone cold, humorless, and unapproachable -- a guy you wouldn't wanna be trapped with on an elevator, let alone have drinks with on a Saturday night...

In other words, you think of the OPPOSITE of Kenny Glick.

For those who've never had the pleasure of seeing Kenny in action, live-trading stocks based on their Volume-Weighted Average Price (otherwise known as VWAP, the lifeblood of his methodology), the juxtaposition may be discombobulating at first...

I mean, here you are, watching what feels like an intimate one-man comedy show, and yet -- you're learning how to make money trading a relatively simple indicator?!?

Kenny Glick is one of the few -- if not the ONLY -- trading tutors in the game who can simultaneously drop a stream of KNOWLEDGE BOMBS while making his students belly-laugh each and every day.

In fact, many folks watching Kenny trade for the first time comment, "You should be a stand-up comedian!"

But what they don't know is this: Stand-up, ironically, was how Kenny was introduced to trading in the first place.

From the Stage to the Street

See, Glick didn't seek out a successful career in trading -- he actually went to school to be an actor and comedian.

In fact, regular viewers of Kenny's LIVE trading sessions are no stranger to his many impersonations, including Donald Trump and Christopher Walken, so it should come as no surprise he once worked behind the scenes at "Saturday Night Live."

In addition, Glick often "interacts" with a whole host of characters in his head, including: The Man in the Van, who enjoys heckling Kenny in the most Brooklyn way possible; The Zen Master, who leads daily breathing exercises ("inhale the VWAP, exhale the negativity!"); and Blanche, a reference to the Bette Davis/Joan Crawford classic "Whatever Happened to Baby Jane?"

Put it this way -- if a blind person listened to Kenny Glick trade, they might very well think they accidentally tuned into an improv class or The Howard Stern Show.

As far as finding his way to trading, legend has it that after doing a stand-up show in the '90s, Kenny was approached by a powerful broker who happened to be in the audience.

Always up for an adventure, Glick took him up on his offer to corral that charisma and comedic chops to help pitch stocks...

While learning the trading ropes, Kenny was overcome with a nostalgic feeling he didn't even realize he missed -- the high he felt trading baseball cards as a kid.

In retrospect, he now sees he was "innately a trader at 13."

As he would with stocks later down the road, the young Glick would acquire the cards of players he thought would do well... then turn around and sell them for more than he paid.

His dad, a math teacher, would often drop Kenny & Co. off at hotels for various baseball-card-related events, and one Sunday they made a cool $1,200 in a single afternoon.

"Teenage kids with that much cash? We were kings of the world!" he said. "After that? FUGGEDABOUDIT -- I was hooked."

Against this backdrop, it doesn't take a rocket scientist to see how Glick fell in love with trading stocks and options...

But as with most heroes, his journey to VWAP dominance was filled with a few detours -- and even danger.

Living on the Edge

It didn't take long for Kenny to realize many Wall Street (and off-off-Wall Street) firms were mired in greed and corruption on a massive scale, particularly in the penny-stock arena.

Over the first few years of his trading career, he jumped around from company to company, startup to startup, seeking an employer with more integrity -- and he kept coming up short.

Once, he was even threatened to get BEAT UP if he didn't strong-arm a client into a shady deal (Kenny quit with a quickness).

Glick obviously wound up finding his groove as a day trader, and because his life story could be titled "The Forrest Gump of Brooklyn" (he's everywhere, man!), he even appeared on several big-network TV shows defending day trading in the late '90s.

After an in-too-deep trader shot and killed nine people at two day-trading firms in Atlanta, the media was on a mission to "cancel" the entire practice, as the kids say.

"The press was looking for the next Wall Street psychopath, and I guess I fit the bill, so they interviewed me," he said.

Of course, it was actually Glick's charisma both on and off camera that really made him an excellent interviewee, and he made the media rounds defending traders who don't hold stocks overnight. 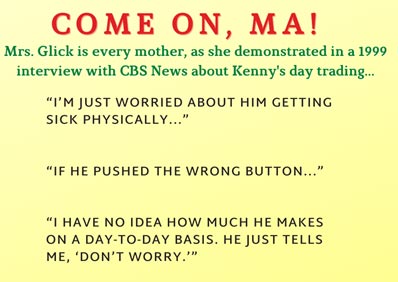 Kenny and his parents were interviewed by CBS News in 1999He argued that many of the haters likening day traders to degenerate gamblers likely had long-term stock positions of their own...

And the only difference between them and the day trader FIENDS was the time period -- minute-to-minute vs. month-to-month charts.

Kenny, like most traders, blew up his trading account a few times early on attempting to find his groove.

He went through the whole indicator rigamarole, trying to play the usual suspects like Fibonacci retracements, simple moving averages, various relative strength yardsticks, etc., but it all became too much.

"It was like abstract art, some of these charts, with the 600 lines and graphs and zig-zags," he said. "I was like, 'Can you dumb it down a little for me?'" 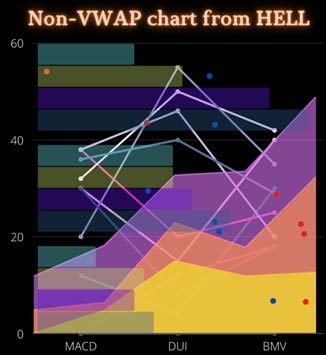 My favorite PicassoBut then, Kenny found the Holy Grail of Trading: VWAP.

As a big short seller (someone who makes bearish trades), his favorite trade was the fade -- he liked when stocks would gap up on earnings, and he could make money as they dropped back to earth.

And when he was introduced to VWAP by the Emperor and Overlord of VWAP -- Zack Hurwitz and Brian Shannon, respectively -- he realized he struck gold...

Kenny now had a way to give himself a head-start on his trades -- including the earnings fade -- and the simplicity of VWAP was nothing short of a revelation.

Even better? It was REPEATABLE.

In fact, Glick often likens VWAP trading to "Groundhog Day" -- the Bill Murray comedy where every day is the same.

The symbol letters might change, and the numbers change, but the VWAP setup is always the same.

It was a game-changer when he realized the power of the VWAP... which allows Kenny to make money on both sides of the trade, as a bull and a bear.

But while he may feel each trading session is the same, one certainly doesn't get that feeling watching Glick teach others how to capitalize on "the only trade you'll ever need" (as the lyrics to his original VWAP song go)...

Plus, when everyday is "the greatest trading day ever," there's definitely nothing wrong with a little repetition...