Space has been in the spotlight for most of 2021. Now, with NASA and Elon Musk's SpaceX's DART missile launch to crash into an asteroid, it's trending once again. And Shift4 Payments stock is way for investors to get a slice of SpaceX. 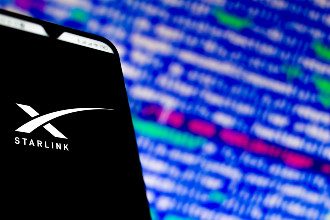 While it might not be direct, Shift4 Payments Inc. (NASDAQ: FOUR) is a backdoor play on Starlink, SpaceX's satellite Internet service. The fintech stock stands to gain more than 100% over the next 12 months because of the five-year deal. It helps that the payment processing market is expected to reach more than $75 billion by 2026.

This partnership with Starlink didn't come out of the blue though. In fact, Isaacman was one of the few who flew to orbit with SpaceX back in September during the historic Inspiration4 mission.

And it could be a boon for Shift4. After the third-quarter results, Shift4 executives claimed that Starlink is a massive opportunity that exponentially grows the company′s total addressable market in all areas.

So, how will Shift4 benefit from this partnership with Starlink? Let's find out...

Founded in 1999 by Jared Isaacman when he was only 16 years old, Shift4 Payments specializes in mobile payment software and hardware for mid-sized companies. Shift4 works with over 200,000 businesses in the retail, hospitality, leisure, and restaurant industries. Recently, the company signed on to power BetMGM's online gaming and sportsbook platform.

Shift4 processes more than 3.5 billion transactions annually for over 7,000 partners, and it surpassed $1 billion in weekly processing volume back in June 2021. This has led the company to develop strong recurring revenue, up 75% year over year.

And this five-year deal with Starlink offers Shift4 an opportunity to grow that revenue even more.

Shift4 converts Starlink's payment volume to its services. This provides Shift4 with roughly $100 billion worth of subscription payments over the long term.

For context, Starlink is Musk's project to build a highly accessible Internet network.

By using more than 1,700 satellites - or constellations in the space industry - the plan is to deliver high-speed Internet to areas that don't normally have access to high-speed Internet. It's a way to further boost global connectivity. Starlink is also testing the waters of inflight Internet service, as well as connectivity on larger trucks and ships.

The Internet company offered limited beta program to gauge interest. Initial hardware was priced at $499 and the Internet service itself cost $99 per month. Roughly 90,000 users in 12 different countries subscribed to Starlink, with half a million orders placed by potential customers.

Starlink is valued at slightly more than $30 billion - and its parent company SpaceX recently hit a valuation of $100 billion. The number of users is expected to reach over 14 million in 2025, and annual revenue could be as high as $10 billion by 2025.

If this kind of growth is reached by Starlink, then Shift4 will ride that wave higher.

Since the company earns money from merchants and payment fees, as well as transaction fees for third parties, this will help supply a steady stream if revenue for Shift4 throughout the duration of the deal.

The company's revenue is expected to grow to $382 million, up from $377.8 million by the end of next quarter.

And right now, Shift4 is trading at $54.48 per share. That's a huge discount compared to this fintech stock's potential.

Yahoo Finance has an average price target of $109 - a move 100% higher over the next 12 months. But once Shift4 starts seeing the money from Starlink, the stock could climb as high as $145 per share.