Cosmos is a blockchain at the center of fixing the one major flaw with cryptocurrencies: Blockchains sometimes need to talk with one another. 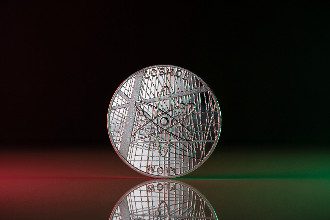 That makes it easier for developers to build new blockchains and remove barriers that prevent them from talking to each other across networks. The more blockchains built using Cosmos, the more utility those cryptos have, and in turn, the more valuable they become. And our Cosmos (ATOM) price prediction will show you just where this innovative crypto is moving in 2022 and beyond.

Now, Cosmos has gotten a lot of attention in 2021, and for good reason. It's even one of Alternative Asset Specialist Nick Black's top crypto picks for being an "efficient, very elegant token."

It's a solid cryptocurrency that solves this important problem for the industry: connecting blockchains. This lets cryptos excel in one area, then work with other blockchains that have complementary strengths. And it's this ability to connect that has Cosmos dubbed the "Internet of blockchain."

Cosmos' native token, ATOM, has moved 425% higher for the year so far - without showing any signs of slowing down.

So, how much higher could ATOM move? Let's find out...

What Is Cosmos (ATOM)?

Cosmos is a decentralized network of blockchains that can scale and/or talk with each other. The idea is to create faster and cheaper decentralized applications - anything from a non-fungible token (NFT) marketplace to decentralized exchanges - by allowing them to run on their own dedicated blockchains.

But the catch is that those dedicated blockchains are not cut off from others, so users are not locked in to just one specific blockchain.

Cosmos also provides developers tools to build their own blockchains that are fully customizable for their specific use. Each new blockchain is interconnected via the Cosmos network. Communication across blockchains is important, and Cosmos is designed to make it happen.

This communication allows someone to use Bitcoin to pay for something within an application that runs on an Ethereum network.

Think of it as if you had Verizon and could only text within your phone provider. This limits accessibility, which then lowers the number of users within the specific network for the provider and cuts you off from any family or friends who have AT&T or T-Mobile. Each time you did contact someone outside your network, you had to pay a hefty fee, which made you less likely to reach out to those individuals.

So far, Cosmos has over 250 apps running on its network. That includes big-name projects like Binance Smart Chain and crypto.com - both of which pay a user fee to Cosmos in the their respective native crypto.

So, where does all this innovation leave ATOM?

Cosmos Crypto Price Prediction for 2022 and Beyond

As it turns out, ATOM is in a great spot to benefit from the work Cosmos is doing.

While it isn't likely to be an absolute game changer in the grand scheme of cryptos, it's a fast, clean, elegant, simple-to-use blockchain that's garnering a lot of positive attention.

What does Nick Black think about Cosmos?

"We like Cosmos... I think, safely, there's going to be a lot of future investments in Layer-1's [blockchains]."

When it comes to movement, Black has set a price target of $200 for ATOM in 2022. The blockchain is gaining in adoption and use, and CosmoStation further opens up utility by making multiple wallets easy to access.